A Wine and Food Pairing: Grilled Cheese and White Wine 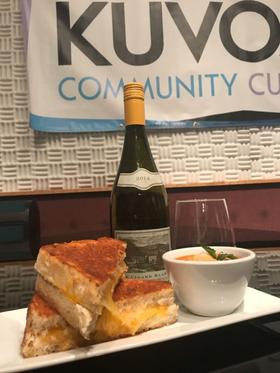 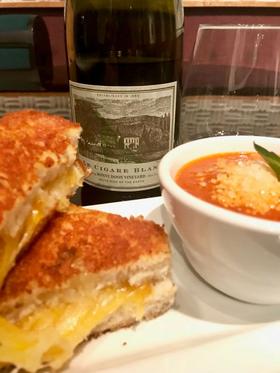 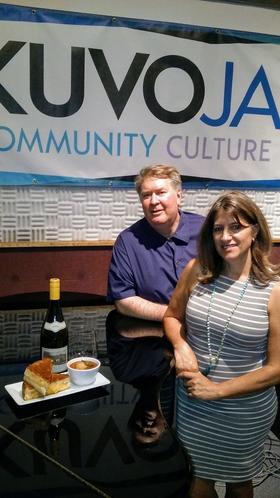 I attended a lunch recently, where I was entertained by Randall’s observations.  Here are a couple of my favorite quotes:

“This is meditation wine – a wine to contemplate”

“This is excursion wine”

“Let’s have a seance with this wine”

“This is gastronomy wine”

Kermit Lynch said that “Mourvèdre should smell like bouillon”

At the beginning of his career, Randall Grahm was fascinated with Burgundy and wanted to do something really cool but found that Pinot Noir wasn’t very well suited for the climate in Santa Cruz, the area in which he was located. He kindred a friendship with now famous wine importer Kermit Lynch which resulted in an interest in Rhone varietals.  He found some old vine Grenache and Mourvèdre and in 1981, operating on his instinct began to make Rhone varietal wines releasing his first vintage in 1984.  He is definitely one of the most forward-thinking winemakers, first to really produce the Rhone varietal wines on a larger scale and hence became known as the Rhone Ranger. There has been an interesting progression since.

He initially founded his flagship wine Cigare Volant as a homage to Chateauneuf du Pape, basically following that region’s recipe.  After the years he discovered that Chateauneuf really wasn’t his favorite, so he began to sway from the recipe and now makes that wine according to what the vintage produces.

A bad romance with corks ended with a cork’s funeral when he experimented first with synthetic corks, but ultimately fell in love with screw tops, describing them as “brilliant”, because wine can live 50 percent longer and winemakers don’t need to use as much SO2.  It turns out, there is a lot more to screw tops than one might think including different liners for those tops.

Randall is vigilant about farming where he strives to achieve a balance between having a little stress on the vines without vines being stressed out.  Many of his vines are farmed organically or bio-dynamically and he strives for dry farming.  His thought is that drip irrigation creates a dependency and the grapes can’t reflect a strong impression of the soils because the vines focus on one small area that is irrigated.  He likens this process to growing flowers in a pot.

Talk about using native yeast is all the rage with young winemakers, but Randall has been doing this for decades.  For him, site and place matter.  He handles the grapes a gently as possible and strives for all the work to be accomplished in the vineyard.  In this way, Randall has been hip, longer than many hip winemakers have been alive.

Tasting his wines is the only true method to decide for yourself.  We’ll be unscrewing three wines, so come on down, see of the character of the wine can live up to even a fraction of the character and charm of its maker. 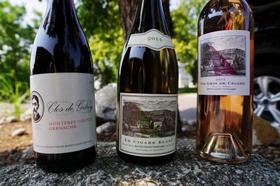 Le Cigare Blanc is the white analog of Le Cigare Volant, Randall Grahm’s homage to the complex blended wines of Châteauneuf-du-Pape. The great white Cigare is not unlike the great white whale; rarely seen, difficult to catch, yet its name is legend. It’s a rich, savory wine with greater power and extraction than one typically finds at Bonny Doon.

For a long time Randall Grahm went to bed aïoli, clovèd in nothing but the barest essential oils. The Wine Formerly Known as Clos de Gilroy (TWFKaCdG) pays homage to the quaint, rustic town of Gilroy, the spiritual locus of all matters alliaceous. However, note well, the fruit for this wine does not, despite its name, derive from Gilroy, but instead primarily from the vivaciously scented Alta Loma vineyard in the Arroyo Seco region of Monterey County, accompanied by equally expressive Grenache from Rancho Solo, located just outside the wind-swept, tumble-weeded town of Soledad.

“This bottling from four vineyards, with 12% Mourvèdre, shows loads of crushed carnation, rose petal, cranberry and raspberry on the nose. There is a compelling freshness to the palate, with potpourri and lavender flavors meshing into a background of pomegranate and rosewater.”

This Vin Gris is made from bespoke grapes and is not a byproduct of red wine production, per se. We harvested at the appropriate ripeness level for its style. The essential principle here is that less is truly more. Rosehips, cassis, fraises de bois, citrus rind, with a wonderfully austere stony finish.

Tune in to KUVO 89.3 FM at 4:30pm. This week we featured the Bonny Doon Le Cigare Blanc with an amazing grilled cheese from Dunbar Kitchen & Taphouse. Visit them at 2844 Welton St.