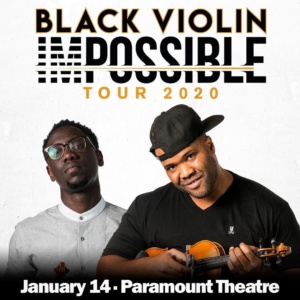 Black Violin is lead by classically trained string players Wil B. (viola) and Kev Marcus (violin). Joining them onstage are DJ SPS and drummer Nat Stokes. Performing at the Paramount Theatre on Tuesday, January 14 at 8pm (doors at 7pm).

The band recently released their track “Dreamer” and shortly after released an accompanying video. Black Violin is currently writing and recording their next studio album expected to be released late summer 2019.

The CJRO presents A Night of Sizzling Soul with Larry Braggs