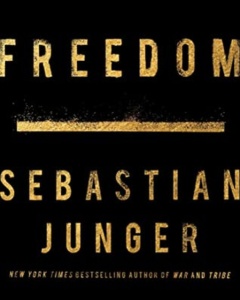 Freedom is an everchanging feature of our lives. Will you be pulled along by cultural changes and government reforms? Are you inclined to hang on to what you got? Or, will you nudge that rut by trying something new. If you received an early release from prison you no doubt have a near-peak experience of what it means to be free. Less awesome, you or your parent may be reluctant to retire from driving that old clunker despite failing eyesight–its your freedom! Materializing freedom may be needed to measure its extent and presence in your day. Author Junger takes a more abstract approach.

This is all difficult to start, because people just do not know what they want, and freedom may not be the answer to your problems. Freedom of choice is scary to most. It is best that people be told what to do. Retirement from work and its expansion of available choices causes the citizen to freeze up; it is better that your day be scheduled for you. Freedom is something to fear.

Junger is on a long walk up the East coast from Washington into eastern Pennsylvania and then westward through the state to Pittsburgh. His company seems to be four others who learn of his plan; that plan is to write a book on freedom while one pursues it without encumbrance except the pack on your back. The path is the Juniata River valley and the rail lines that parallel it. Streams flow out of the mountains. This is a walk of freedom. The early frontier settlers in the eighteenth century trudged on foot. Daniel Boone went on “Long Hunts” that included the Carolinas to Tennessee or to Florida–six months away from home. A runaway slave would walk to escape bondage with maybe some help from the underground railroad to try freedom outside of the territory.

This book is about America’s history in the making. The early settlers advanced on foot in search of land to provide food and sustenance. They encountered the indigenous people. The Iroquois acquired other tribes with battle and the Apache, with their small-scale maneuvering tactics, frustrated the U. S. Army and delayed their acceptance of forced internment. The American millworkers of the early twentieth century fought for collective bargaining rights and their female supporters advanced the cause while evoking confusion from the oppressors with fearless work. A century later, the Taliban in Afghanistan drove out the Russians before doing the same to the Americans. Fighting light on your home turf is how to overcome a superior military force. The Viet Cong did this also. “Fight to be free” is a theme of this book; overcome oppressive governments, religions, societies and advancing enemies.

The contemporary men of this story pursue freedom in a less valiant way. They trudge with packs while on or along railroad property. Their enemy is the railway company cop and harassing locals. The Juniata River cuts through the valley they walk and the small towns of Maryland and Pennsylvania may be visited when the walkers need a real full meal or a man-made shelter. But they sleep on the ground. Theirs is a four hundred mile journey.

If and when you find your mind ventures from a stream of consciousness to a fixed state of inescapable mush, consider packing it in and gearing up to venture down the road to an unknown and distant destination. When daylight fades, consider hitchhiking into the next town to seek lodging for the night. Or, you may choose to bed down with a tarp for shelter. You have a choice. Finally you will be free, but for how long?