We are very fortunate to live in Metro Denver along the Front Range of Colorado as its quality of life is above the national average and we have a multitude of advantages, natural and man-made surrounding us. One of those gifts is the amazing jazz scene and its abundance of quality players and educators living among us. One of our top tier members of the jazz community is the multi-instrumentalist and excellent educator Brad Goode. His pedigree for music and teaching is of the highest caliber and we’re privileged to enjoy the fruits of his talents.  For his most recent recording Brad recruited the versatile, veteran tenor saxophonist Ernie Watts to accompany the rhythm section of Adrean Farrugia-piano, Kelly Sill-bass and Adam Nussbaum at the drums, all of whom have previous played with Goode evidenced by the seamless accompaniment through all the provocative changes of tempo, rhythm and imaginative arrangements included in the 10-song set of That’s Right! Issued on Origin Records for which Brad has made three other outstanding albums. This quintet recorded as a team, whereas Brad composed three of the songs, all four of the other players each contributed a tune with three gems from the jazz cannon to round out the program.

Brad Goode grew up in Chicago and began playing the violin when he was only four years old, then moved on to guitar at six and to cornet at 10 years old. After the family moved to East Lansing, MI where Brad graduated from high school, Goode returned to Chicago where he was groomed and mentored by some of the best musicians the Windy City had to offer, such luminaries as Eddie Harris, Von Freeman, Jodie Christian, Ira Sullivan, Red Rodney and others.  In the late 90s Brad discovered another passion, jazz education. Since then he has taught at the University of Cincinnati, American Conservatory of Music, Cuyahoga Community College, New Trier High School and since relocating to Boulder in 2004, at the University of Colorado.  Goode also plays drums and is an accomplished bass player too! In fact, Brad has recently entertained thoughts of playing the violin again, it’s not fair for a man to have so much skill on so many instruments! Brad currently leads the Monday night jam sessions at the Muse Performance Space in Lafayette, CO where he nurtures many of the up and coming players of the Front Range.

Brad is immensely proud of his Chicago roots and its major influence on jazz through the great players hailing from there. On That’s Right!,  Brad selected Chicago legend Von Freeman’s tribute to another Chi-Town master, Gene Ammons, Jug Ain’t Gone to pay homage to Jughead, one of my preferred songs from this release, I also thoroughly enjoy the originals Perplexity and Who Parked the Car?, a situation we all have been in. I also favor the standard Blues in the Night as it takes on a whole new aura as played by the Brad Goode Quintet. While listening to this recording from start to finish don’t be surprised if you find yourself saying that’s right! over and over again just like I did! 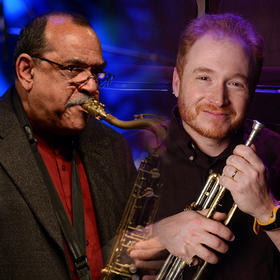