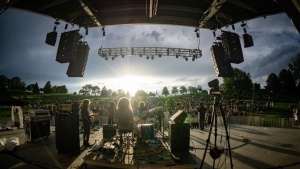 DENVER — Local music and performing arts venues are starting to reopen — slowly. With warm weather returning and some pandemic restrictions lifting, the sun is starting to shine on an industry hit hard during the past year.

Revenues down and jobs lost

Performances by the bands Three Dog Night & Firefall wrapped the 2019 concert season at Levitt Pavilion Denver. Heading into the off-season, the outlook industry-wide for the new year was impressive.

“Year over year there’s been a tremendous amount of growth in live music. 2020 was supposed to be this major breakthrough year. Almost everybody was on tour, venues were filled up, our projections were looking really, really strong.  And, then COVID hit and it all fell apart,” said Chris Zacher, Executive Director for the Levitt Pavilion Denver.

More than 70 concerts were canceled or rescheduled at his venue last year.

“It’s been really difficult. It’s been trying to navigate… a tough situation for everyone. Sponsors aren’t bringing in revenue, donations are down, grants are being redirected towards the health crisis. It was a struggle all year,” he explained.

Levitt Pavilion Denver is a 10-acre nonprofit cultural venue located in Ruby Hill Park. Its goal is pretty simple: to produce shows that introduce our community to the artists that live and work here into the national touring acts that are emerging.

Funded through sponsors, grants, donors and concessions, the venue offers 50 free community concerts each year along with an admission-based series of typically about 20 concerts. All artists are paid a fair wage.

“Our revenues were down about 73 percent from 2019 and I’m one of the lucky ones. A lot of my friends were down 90 percent or 100 percent, nationally,” said Zacher.

While the Levitt team consists of five full-time year-round staff members, Zacher says more than 150 contract jobs were lost when the concert season was canceled.  Security personnel, stagehands and bartenders, gig-workers in the industry, were out of work.

“Most of these individuals work at other venues across the state.  They are 1099-contractors and they’re depending on all of these venues to be open to make a living,” he added.

Signed into law as part of the second COVID-19 Relief Bill at the end of December, $15 billion federal emergency relief funds were allocated to the Save our Stages Act. In mid-March of this year, an additional $1.25 billion dollars were added as part of an additional aid package.

“Most of our venues across this state are in peril. They need this relief funding so they can continue to operate,” explained Zacher while emphasizing the importance of the Save our Stages Act, now officially named the Shuttered Venues Operators Grant Program.

“It’s a chicken and the egg thing. We have artists and we have venues and artists aren’t being paid because venues aren’t opening. Venues can’t be opened because of the health crisis.  So, the Save our Stages Act that we passed truly will save this industry. It will help us get to when we can reopen with at least 70 percent capacity,” he said adding that that is the percentage when venues can return to making a profit.

On April 6, Zacher joined Senator John Hickenlooper (D-Colo.) in a panel discussion at Levitt Pavilion Denver with other musicians, promoters, and venue managers to discuss the relief provided by these grants.

“We see a structure that’s been damaged, but that is going to come back,” Hickenlooper said, referring to the state’s music industry. “It’s going to come back in a big way, and all the folks on this stage have played a big part in that.”

Other speakers said the return of live music is going to reignite Colorado’s economy. Still, the panelists urged patience and caution.

Jazz musician Erica Brown said concert venues and attendees must “obey the science” to make this return work. The alternative, she worries, is that we’ll be right back where we are six months from now.

You can watch highlights from the discussion HERE.

The team at Levitt Pavilion Denver is gearing up for their return. The first concert is planned for Friday, May 14. Artists will be announced on April 20.

Other concert venues are releasing plans as well. Red Rocks Amphitheater, for example, announced it would welcome up to 2,500 fans when concerts resume.

There will be a lot to plan and Zacher says for many venues it will be like throwing a dart at the wall and seeing what sticks. He’s keeping a close eye on Denver’s projected COVID-19 status and will adjust accordingly.

“At the that point in time, outdoor venues should be at about 60 percent of capacity based off of 6-foot social distancing.  So, a venue like this that’s 3600 patrons,” he said, adding that capacity limits are only one part of the planning puzzle.

“Then there’s other pieces. How do you get them in the venue and out of the venue safely? How do you set up your food and beverage systems? Your restroom systems and your security and all of these ancillary components that we utilize in different ways normally,” he wondered aloud.

All questions many venues are asking and planning for right now.

Each venue will have safety plans for guests, staff and performers to follow. Zacher hopes we’ll all be patient.

“Take time to understand that we’re still in the midst of a pandemic and while the vaccinations are up- ticking and this weather is getting warmer, that does not necessarily mean that it’s safe to return to normal. So, you have to follow the rules that are set within the venue. People can’t be rushing the stage, they can’t be meandering around the venue,” he explained, adding that this is only temporary.

At Levitt Pavilion Denver, guests will sit in pods that will be spray-painted on the grass to identify spaces that are off-limits.  It’s also likely that food and beverage service will come directly to each pod, reducing the amount of mingling within the crowd.

If the current positive trends continue, Zacher feels optimistic that industry-wide, more outdoor venues will be operating by mid-June or mid-July.

He hopes additional indoor venues will start hosting larger audiences by late September or early October. Remember, much can change along the way.