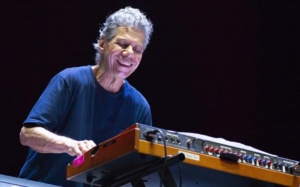 The last couple times Chick Corea came through Denver, he was highly electrified. The summer before last, he performed with the reunion tour of Return to Forever. Last summer, he came through with The 5 Peace Band featuring John McLaughlin. Both of those performances caused brown-outs throughout the metro area. Monday night he returned with 3/5 of The 5 Peace Band, but this time he and his band mates played exclusively acoustic instruments for a set of mostly straight ahead jazz. And the local power plants rejoiced.

Corea’s current ensemble, dubbed “The Freedom Band” includes Christian McBride on bass and Kenny Garrett on alto sax, both of those players late of The 5 Peace Band. The “new” member is 85-year-old Roy Haynes on drums. Before the show, some wondered how an 85-year-old drummer would hold up in the midst of all the manic virtuosity on stage. The drummer for The 5 Peace Band was hyperactive Vinnie Colaiuta and the RTF drummer is, of course, the ultra-busy Lenny White. Those drummers cram notes into a measure like Goldman Sachs crams government dollars into its pocket. Haynes has a different style, always has. He swings, still does. And swing he did Monday night propelling the band through tunes that saluted several of his past employers including Bud Powell and Thelonious Monk. In full swing mode, he would typically ride a cymbal with his right hand and with his left make syncopated taps (and occasional shots) on the snare. His performance in no way resembled a “farewell tour” or the propping up of the beloved grandfather for sentimental reasons. Haynes came to play and he went toe to toe with his band mates and didn’t miss a beat. For those of us who are currently growing older, he served as an inspiration for our futures.

This aggregation of musicians actually recorded together 13 years ago when these four got together with Joshua Redman and Wallace Roney for the album Remembering Bud Powell. Fittingly, Monday night’s set began with a tune from that album simply called “Bud Powell.” The band played some Corea material including his tune “Windows,” but also featured several jazz standards including “My One and Only Love,” “All Blues” and for the encore, Monk’s “Blue Hawk” with liberal quotes from “Bolivar Blues” (or “Ba-lue Bolivar Ba-lues-are” if you prefer). The Monk tune(s) were a highlight. The gulf between Monk’s style and Corea’s style is so vast, it would seem like mixing the two would be like trying to put together oil and water. This being jazz, however, and not something as mundane as an environmental disaster, the results were both pleasant and exciting. Corea’s playing on that encore featured the requisite Monkish quirkiness with generous portions of Corea flash. Indeed, a tasty gumbo.

Christian McBride continues to impress. He’s simply one of the best bass players out there. One thing that sets him apart is his articulation. On his several solos, each note, no matter how short or how quickly it was followed by the next note was crystal clear. That aspect of his playing coupled with his strong melodic sense made his solos delightful, rather than something to be endured as so often happens when the only instrument left playing is the bass.

For his part, Kenny Garrett demonstrated once again that he is one of the most expressive horn players on the scene. Even in this group of world class musicians he stood out for his ability to tap directly into his soul and channel every nuance of his emotions straight into his alto sax. This was particularly apparent during an unidentified piece that sounded like a Corea original with intricate lines that were at once delicate yet muscular. Garrett’s solo reached stratospheric heights of pleading intensity. His work on “All Blues” was another highlight. That’s a great tune, but it’s been covered so often it may be getting close to being played out, but Garrett found additional, previously unmined veins in the venerable classic.

Corea, himself was in fine form, amiably chatting with the audience about the band and the music. He stayed with a single acoustic piano all evening; no jumping back and forth to different keyboards; no playing different keyboards with each hand; no fiddling with the effects or monkeying with the sound; just straight ahead playing. He seemed pleased to play some jazz standards and pay homage to some of the jazz greats of the past. Stripped of the electronics and working almost exclusively in the bebop context he could relax and emulate the band’s name: Freedom.