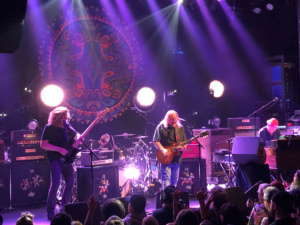 What’s new with Gov’t Mule? Like every other band in the world, they had to take a COVID break from touring. And now, like many bands, they are back on the road after their forced vacation. One thing that’s new is their stage setup. After spending decades on stage right (left as you look at the stage), Warren Haynes now takes center stage. And that’s appropriate since he’s been the leader and guiding force behind the Mule since its inception in the early ‘90s. Another new thing is that the band now has walk-up music while they take the stage and strap on their axes. Another development during COVID was the Mule’s out-and-out embrace of the Blues.

Haynes is a Classic Rock guy. It’s obvious from his membership in the Allman Brothers Band and The Dead. The Mule also traditionally sprinkles Classic Rock covers into its sets. The sound of the Mule itself harkens back to the heavy guitar bands of the ‘60s and ‘70s. Classic Rock, of course, owes its existence to the Blues. The two forms are kissin’ cousins.

Over the course of its career, Gov’t Mule has maintained a platonic relationship with the Blues. The very first tune on the Mule’s first album is “Grinnin’ in your Face,” an acapella number written by Son House, an authentic Blues figure. But, such overt Blues references were seldom seen. The Mule took the Blues out on dates, bought the Blues nice dinners and fine champaign. But mostly, the Blues was left standing on its doorstep at the end of the evening with nothing but a good-night kiss. While the Blues appreciated the attention, it couldn’t help thinking that this was a relationship that should go to the next level. 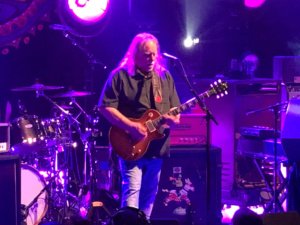 Then, during COVID, ironically, the Mule and the Blues finally consummated their long dalliance. The progeny of this union was not merely a single strapping youth, but twins! Gov’t Mule’s most recent album is Heavy Load Blues (2021, Fantasy) and the deluxe edition is a two-CD set with about two hours of music and almost all of it is pure Blues. The selections are a combination of Mule originals and Blues tunes by the progenitors: Elmore James, Howlin’ Wolf, Muddy Waters, Willie Dixon and Sonny Boy Williamson. There are even a couple Classic Rock covers, Savoy Brown’s “Street Corner Talking” and, weirdly, Elton John/Bernie Taupin’s “Have Mercy on the Criminal.”

Saturday night’s first set at the Fox started off promisingly enough for the Blues when Haynes broke into his acapella rendition of “Grinnin’ in Your Face.” After that, however, the Mule turned its back on the Blues as the band worked through nearly every song from its first album, Gov’t Mule (1995, Relativity). The only exception was the last song of the set, a cover of a relatively obscure Grand Funk Railroad tune from 1970, “Sin’s a Good Man’s Brother.” That’s a song that sounds just like the Mule. In fact, the placement of this song at the end of a set devoted exclusively to the Mule’s first album strongly suggests that it had an outsized impact on a young Warren Haynes and provided a blueprint for his future band and its distinctive sound.

Ever hopeful, the Blues was sure that in the second set the Mule would come calling with flowers and chocolates and the promise of so much sweetness in the dark. But, alas, it was not to be. Instead, the Mule launched into its second album, Dose (1998, Volcano). The second song of the set brought forth another cover, again, not strictly blues, but Jimi Hendrix’ “If 6 Was 9.” Two songs from the Mule’s third album, Life Before Insanity (2000, Capricorn) seeped into the set, “No Need to Suffer” and “Tastes Like Wine.” 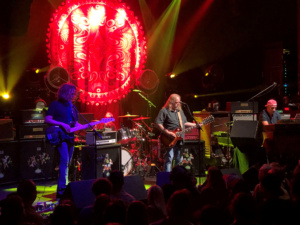 Set 2 ended in a heavy metal frenzy with “Blind Man in the Dark.” As the band left the stage, the Blues held out hope that perhaps the encore could provide at least one of those good-night kisses on the doorstep. But the Blues didn’t kid itself. It was obvious by this time, that the Mule was reliving its past, a time when it was a startup operation, when the band was in its original configuration as a power trio with the late Allen Woody on bass. No, the Blues knew it was destined to go home alone. Sure enough, the aforementioned “Tastes Like Wine” concluded the evening. The only surprise there was that this song is a delicate ballad standing in stark contrast to the energy of the set closer, “Blind Man in the Dark.”

Haynes said little during the concert aside from a couple of queries about the status of the crowd’s happiness quotient. But as he left the stage after the encore, he thanked the audience and then said, “It’s been a special evening.” And it was. Almost always, the Mule mixes it up with old songs, new songs and in between songs. But Saturday night was a night for nostalgia, for reliving earlier times from the 20th Century and enjoying those happy memories. Clearly, the Blues disagreed. By this point, the Blues was sitting at the bar, alone, knocking back whiskey.

But look Blues, you should have known hooking up with an outfit like the Mule, whose musical vocabulary is broad and deep, would bring problems. Sure, there will be further flirtations in the future, but face it, you’re going to have to share this band with others. The Mule just can’t stay true to a single musical form. But, Blues, you should keep this in mind: Son House, one of your most faithful adherents said this about you: “Ain’t no Blues but the Blues between a man and a woman.” You can amend that statement to include the feelings between you and a band like the Mule. For now Blues, you’ll just have to suffer with the blues. 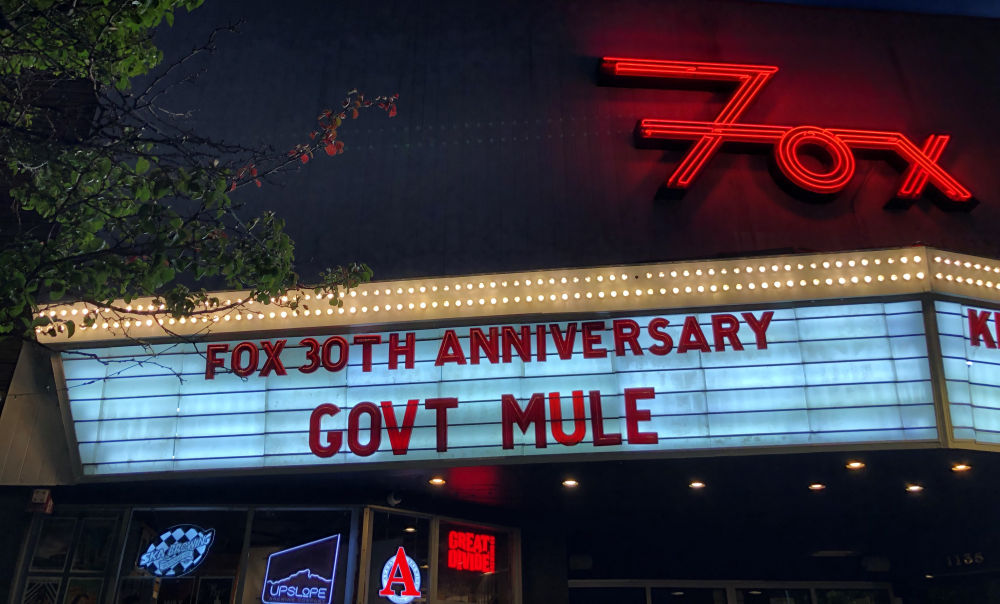