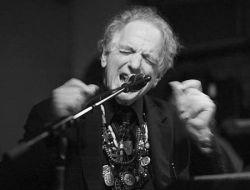 New Series at The New York Public Library for the Performing Arts at Lincoln Center, Celebrates Composer and Musician’s Archives

Composer, conductor, multi-instrumentalist, and author David Amram is a musician with a celebrated career as prolific as it is diverse. While his achievements and influences extend far beyond the city, New York has played a vital role in Amram’s life and music. Specific locations throughout New York have served as inspiration for Amram’s compositions, and his pioneering work with Leonard Bernstein and The New York Philharmonic, Arthur Miller and Elia Kazan, Joseph Papp, Jack Kerouac, Dizzy Gillespie, Pete Seeger and many other jazz, folk, and world music artists has helped shape the city’s cultural landscape. To celebrate the recent acquisition of Amram’s archives, The New York Public Library for the Performing Arts in Lincoln Center will present David Amram’s New York, a series of public programs and offerings that explore his remarkable career and ongoing relationship with the music of New York.

The series begins on Saturday, April 26 with a screening of the documentary feature film David Amram: The First 80 Years, followed by a conversation between the filmmaker Lawrence Kraman and Amram. Later that afternoon, Amram will lead a walking tour of Manhattan locations that have played a significant role in his life and music. The walk will be co-hosted by author Bill Morgan and sociologist Dr. Audrey Sprenger of SUNY Purchase.

On Tuesday, April 29, the series concludes with a special concert of Amram’s chamber music compositions, featuring a program that spans Amram’s career and musical influences. Nora Guthrie, daughter of Woody Guthrie, will also be in attendance to celebrate her commissioning Amram to compose THIS LAND: Symphonic Variations on a Song by Woody Guthrie. Performers for the concert include Howard Wall and Kim Laskowski, both members of The New York Philharmonic, former Metropolitan Opera concertmaster Elmira Darvarova, and saxophonist Ken Radnofsky. The evening will also mark the release of two new albums of Amram compositions: The Chamber Music of David Amram – Live from the New York Chamber Music Festival (Urlicht AudioVisual), featuring Darvarova; and Newport Classic Records’ album of Radnofsky performing Amram’s compositions for saxophone, including the concerto Ode to Lord Buckley and Trio for Tenor Saxophone, French Horn and Bassoon.

In conjunction with the two programs, The Library for the Performing Arts will exhibit original materials from Amram’s archives.

One of the most influential and prolific composers of his generation, David Amram has composed more than 100 orchestral and chamber music works, two operas, and scores for the award-winning films Splendor in The Grass, The Manchurian Candidate, and Jack Kerouac’s Pull my Daisy–all while balancing a career as a pioneering jazz improviser, symphony conductor, and multi-instrumentalist featuring 35 instruments from around the world, all of which remain a source of inspiration for many of his formally composed classical works. Amram was a vital force in the Beat Generation, and presented the first-ever public jazz-poetry concerts in New York City in the 1950s with Kerouac. Amram was the first Musical Director and composer for Joseph Papp’s New York Shakespeare Festival, for the Phoenix Theater, and for The Lincoln Center Repertory Theater, where he composed scores for new plays by Arthur Miller directed by Elia Kazan and Harold Clurman. In 1966, Leonard Bernstein named Amram The New York Philharmonic’s first Composer-In-Residence. Five years later, Amram became the Brooklyn Academy of Music’s first Musical Director for Young People’s, Family and Free Parks Concerts, a position he held for nearly three decades.

Today, Amram continues to compose music while traveling the world as a conductor, soloist, bandleader, author, visiting scholar, and narrator in five languages. In addition to the David Amram’s New York programs at The Library for the Performing Arts, Amram’s other projects this spring include the release of THIS LAND: Symphonic Variations on a Song by Woody Guthrie (Newport Classic Recordings), a live recording of Amram conducting the Colorado Symphony Orchestra in a performance of his work by the same name, and the DVD release of David Amram: the First 80 Years in May. Amram’s fourth book, David Amram: The Next 80 Years, will be published in 2015.

All events included in the David Amram’s New York series take place at The New York Public Library for the Performing Arts (40 Lincoln Center Plaza), and are free and open to the public.

Post-Screening Conversation with Lawrence Kraman and David Amram In Person

Lawrence Kraman’s 2012 documentary about the life and times of David Amram features interviews and performances with Buck Henry, Pete Seeger, Sir James Galway, Kurt Elling, Paquito d’Rivera, Max Gail, Larry Merchant, Candido Camero, Bobby Sanabria, John Ventimiglia, Phil Myers, Maurice Peress and the Queens College Orchestra, David Broza, Avram Pengas, Tiokasin Ghosthorse, Floyd Red Crow Westerman, the Earl McKintyre Orchestra, and David Amram and his three children Alana, Adira and Adam. This compelling film not only explores Amram’s unique career and the breadth of his talents, but as the title implies, also proves that one of the most exciting aspects of Amram’s story is knowing that with his endless energy and zest for life, his narrative is far from over, and the future chapters sure to be just as exciting as the past.

Meet in the lobby outside of The Bruno Walter Auditorium, located at the Library’s 111 Amsterdam Avenue entrance

David Amram leads this walking tour of Lincoln Center and other nearby locations that have influenced his life and music. The tour will be co-hosted by Bill Morgan and Dr. Audrey Sprenger.

Over the course of his career, David Amram has composed more than 100 orchestral and chamber music works. For this concert, he selects four of his favorite chamber works:

Blues for Monk for Unaccompanied Horn (1982)

For Alto Saxophone and Piano

About The New York Public Library for the Performing Arts, Dorothy and Lewis B. Cullman Center

The New York Public Library for the Performing Arts houses one of the world’s most extensive combination of circulating, reference, and rare archival collections in its field. These materials are available free of charge, along with a wide range of special programs, including exhibitions, seminars, and performances. An essential resource for everyone with an interest in the arts – whether professional or amateur – the Library is known particularly for its prodigious collections of non-book materials such as historic recordings, videotapes, autograph manuscripts, correspondence, sheet music, stage designs, press clippings, programs, posters and photographs. For more information please visitwww.nypl.org.