Please scroll down to see video – you’ll love it!

A brilliant virtuoso, Dorothy Donegan constantly switched between boogie-woogie, bop, stride, Art Tatum-style swing, and classical music, sometimes in the same chorus. In concert, she often put together spontaneous medleys of unrelated songs and was never shy to dance while she played. She studied at the Chicago Conservatory and Chicago Music College and made her recording debut in 1942. Donegan made a sensational appearance in the film Sensations of 1945 but never caught on that big despite her remarkable technique. She recorded a lot less than one would expect (six obscure albums during 1954-1963 and nothing during 1964-1974) and was not really that well-known in the jazz world until the mid-’80s. A couple of live Chiaroscuro CDs from 1990-1991 found her in peak form, but she had to be seen to be fully appreciated. She died of cancer on May 19, 1998. Artist biography by Scott Yanow – AllMusic.com 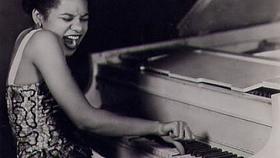