Among the keynote speakers at the 3rd annual Local Food Summit in Denver was Malik Yakini, from the Detroit Black Food Security Network.  (Detroit is considered by many to be a forerunner in the modern urban gardening movement.)  Yakini gave the “First Take with Lando and Chavis” audience a deeper understanding of the term “food desert.” 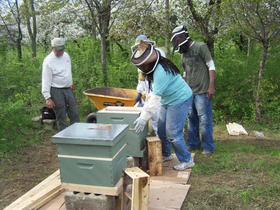 Mari Gallagher‘s study found “more than half of the population of the city of Detroit lives in a food desert, which she defined as an area where you have to travel twice as far to get to a major grocery store as you do to get to what she called a fringe food location.  People end up buying ‘foodish’ things from party stores and gas stations.

“You have young people going to school in the morning having flaming hot cheetos and a red pop.  There are tremendous health problems in the city of Detroit that are directly related to food access.”

In the interview above, Yakini describes how some grocery stores get it wrong, and the role of self-determination in community food development.

Music on this feature is by Kool and the Gang, “Fruitman” from the CD Light of Worlds, and  ”Collard Greens and Black Eyed Peas,” from the CD The Amazing Bud Powell, vol. 2.