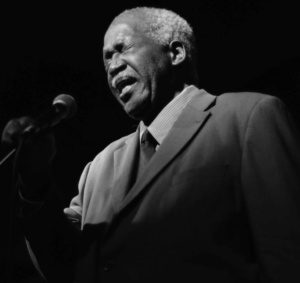 KUVO Jazz celebrates “Ed Battle Day” on Monday, November 25, throughout the day, we’ll be sharing Ed’s music from sessions broadcast live at KUVO and from engagements recorded at venues around Denver. Later in the evening, Dazzle at Baur’s will host a jam session to salute this esteemed Denver jazz vocalist.

Born in New Jersey and raised in the church and jazz-rich Philadelphia, Ed Battle discovered theater in the 1960s and toured in Jim Mapp’s “Playward Bus Company.” Battle moved to Denver in the 1970s, and has appeared in many plays and musicals with the Bonfils Theatre, Cleo Parker Robinson Dance Ensemble, The Eulipions Ensemble and Shadow Theatre. Ed Battle’s rich, warm tone has endeared him to audiences for years, including a 12-year stint at the world famous El Chapultepec in Denver.