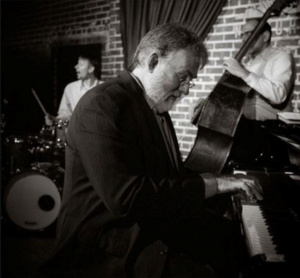 Nocturne and Supper Club is honored to present this unique series that honors the late American jazz singer, Carmen McRae. Regarded as the rare musical equal to her friends Ella and Billie, Carmen had a prolific career in the jazz idiom that spanned from the 1940s into the late 1980s. Her live performances, filled with emotional richness and a heavy swinging style are simply legendary.

This series will offer a special musical insight, as Eric Gunnison was the pianist on Carmen McRae’s highly regarded (and Grammy-nominated) album Carmen Sings Monk. From 1986 to 1991 Gunnison also toured as the pianist and arranger for McRae. Eric will be joined by Denver singer Louisa Amend who will explore many of Carmen’s classics, as well as a few treasures pulled from one of Carmen’s last known existing physical books of music that Eric has managed to preserve much of.

Louisa Amend is a vocalist and educator based out of Denver, Colorado. She graduated from the University of Northern Colorado in 2016 with a Bachelor of Music Education and was a member of a number of the premier ensembles and opera productions produced by the university. After teaching in public schools for a few years Louisa transitioned into working as a freelance musician and founding her own voice studio.

Eric Gunnison was raised in Buffalo, NY, and attended Berklee College of Music in Boston, graduating with a BA in music composition in 1979. He lives in Denver where he has been a mainstay in the music scene for 2 decades. Eric performs the world over and has appeared in concert with Ron Miles, Dizzy Gillespie, James Moody, Phil Woods, Bobby Shew, Chris Potter, Christian McBride, and Eddie Gomez just to name a few.  Since 1991 Gunnison has also been the pianist and a composer/arranger for the Denver super-group Convergence.  Gunnison recently retired from his position at The University of Denver’s Lamont School Of Music and is now exclusively a performer.