If you are looking for free events where you can hang out and catch some good sounds, then this is a very good week for you. Come Saturday and Sunday, there the annual Estes Park Jazz Festival and Art Walk with music from noon until 5 p.m. in Performance Park Amphitheater, 417 W. Elkhorn, on both days. On Saturday, the music starts with the Estes Park Big Band and continues with the U.S. Air Force Academy’s the Falconaires, the Drew Morell Septet doing Horace Silver and the Ken Walker Sextet. For the second day, there’s saxophonist Nelson Rangell and music from saxophonist Tia Fuller and her group reminding us of Denver’s premier jazz family before Conjunto Colores closes things down. 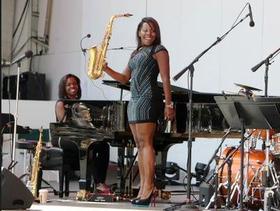 In recognizing bassist Fred Fuller and singer Elthopia Fuller, Tia, her sister and keyboardist Shamie Royston and her drumming brother-in-law Rudy Royston highlight not only mom and dad, but also the Fuller Sound they helped create. The fine bassist Mimi Jones rounds out the quartet and she will be performing live at KUVO on Saturday from 3 until 4 p.m. with pianist Geoff Cleveland and drummer Tony Black. The Fullers represent one impressive pool of musical talent.

Also on the free side, this year’s edition of City Park Jazz begins on Sunday at 6 p.m. with singer Selina Albright, daughter of saxophonist Gerald Albright. After Albright, City Park Jazz’s offerings in June are, in order, pianist Annie Booth, saxophonist Rangell and the Paa Kow Band. If you want to plan ahead, July’s lineup at City Park Jazz is The Messers, saxophonist Eric Trujillo and the Mambotet, Colorado Conservatory for the Jazz Arts combo and saxophonist Lynn Baker. The music on Sundays at 6 p.m. continues into August with pianist Ellyn Rucker on August 2 followed by Conjunto Colores who close it down on August 9. Rucker is this year’s guest of honor at the outdoor City Park series and deservedly so.

Speaking of Sundays, this Sunday offers a tribute to the late Clark Terry by trumpeter Bob Montgomery and his sextet at Nocturne, 1330 27th St., at 3 p.m. (303-295-3333). Montgomery toured Europe with Terry’s big band and knew the great trumpeter and mentor for more than a half century. The Gift of Jazz is sponsoring this musical tribute to Terry.

On Sunday, pianist Art Lande and saxophonist Peter Sommer hit Dazzle at 7 p.m. with a quartet that includes special guest bassist Dean Johnson from New York. Johnson has played with a broad range of musicians and spent more than a decade with Gerry Mulligan. And then on Tuesday, bassist Matt Smiley and saxophonist Briana Harris bring an octet to Dazzle to celebrate the music of Ornette Coleman’s 1971 album Science Fiction along with other Coleman sounds. Interestingly enough, the Bad Plus has also been doing the Science Fiction music with three added horn players, including Denver’s Ron Miles, 15 years after the two-disc Complete Science Fiction Sessions was released for the first time on CD in 2000.

Let’s end on a couple of added notes. First, drummer Antonio Sanchez was originally scheduled to bring his Migration band to Dazzle this week. That appearance had to be postponed, but Sanchez is back on the Dazzle schedule for this fall, appearing with Migration on October 31 and November 1. Second, as Peter Poses informed me, the International Society of Bassists is currently holding its annual conference in Fort Collins at Colorado State University. Bassists Mimi Jones and Dean Johnson are presenters at that meeting, along with payers such as John Clayton, Miroslav Vitous, Mark Dresser, Rufus Reid, Linda Oh, Jay Leonhart and Eric Revis.