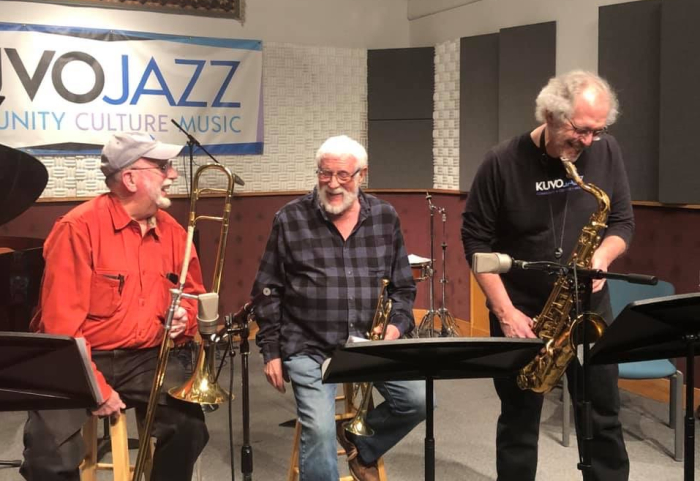 Tune in on Sunday June 2 when KUVO presents its showcase program of past shows from the Phyllis A. Greer Performance Studio.

The room itself was just a storage area with a high ceiling when KUVO moved to the Five Points Media Center in the mid-90s.  But the staff back then had a vision for something significant. Plans were hatched to install baffles to lower the ceiling to 12 feet and deaden the walls. Equipment had to be acquired: a mixing console, microphones, amplifiers and lots of wiring. And instruments were needed. Today, Denver Piano Company and Drum City Guitarland equip the “P.A.G.” with great sounding “home” instruments. More than 300 donors, including individuals, couples, families, companies, foundations, musicians themselves pitched in to create one of the busiest radio performance studios in the nation. In 1996, the Phyllis A. Greer Performance Studio was inaugurated in honor of one of Colorado’s biggest jazz fans. Today sponsors and listener-members of the KUVO Studio Club sustain the broadcast and performance space.

With an estimated 1,000 performances captured on tape and in digital formats, we’ve got some amazing archives to share. It’s “On Stage,” hosted by Susan Gatschet every Sunday afternoon at 4pm. A KUVO exclusive!