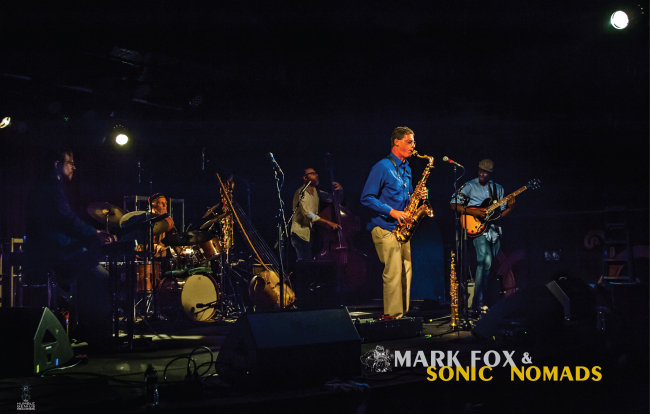 Mark Fox & Sonic Nomads are performing for Studio Club on Sunday, August 18 from 8 to 9pm. The Band is a cutting-edge, creative music, transcendental jazz unit that take the listener to the far reaches of their imagination, deep within their soul & spirit, bringing them to new states of awareness and consciousness. Pulling from the ethers the unique sound that was passed to Fox from his mentors, Archie Shepp, Yusef Lateef, Marion Brown and others, the band carries the Eulipion torch, ancient / future sounds of love, joy, peace and healing. Dancing in the unforeheard realms, the music will take you on a journey, free your spirit & soul and both enlightening and enlivening your outlook on life.

Mark Fox’s debut album, “Three Octaves Above the Sun”, released in 2016 and garnered “Best of 2016” by allaboutjazz.com, was the launch pad for the organization. Returning to the studio last year for 3 various recording session, helmed by Multi-Grammy Award winner & NEA Jazz Master, legendary producer Todd Barkan, Fox’s career is on its way to the international limelight. With NYC based management group, Redwood Entertainment, international publisher, 1630 Music, and a host of manufacturer endorsement, including Selmer Paris, Mark Fox is preparing for the release of his 2nd album, “Iridescent Sounds”, featuring the band included in this performance. The album is slated for release by Humble Genius Records in early October 2019.