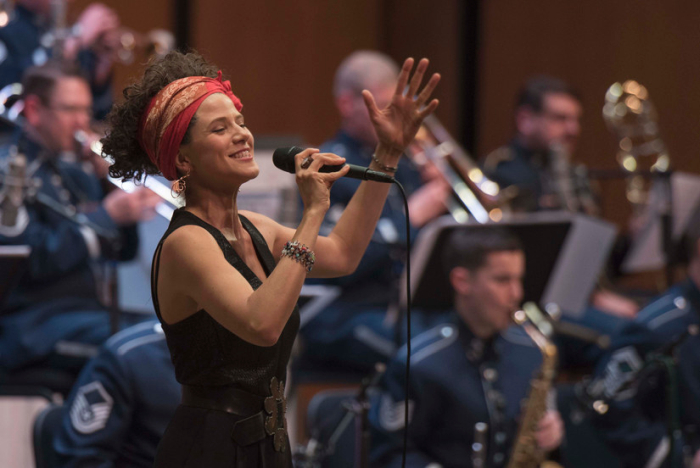 Tune in on Sunday, June 30 at 4 p.m., for KUVO’s performance series “On Stage” features the United States Air Force Airmen of Note with vocalist Cyrille Aimée, recorded in 2018 in Alexandria, VA.

The U.S. Air Force Airmen of Note came of age during the service of Air Corpsman Glenn Miller. It seems a full-circle come-about that a “free” France was such a fertile ground for jazz. Cyrille Aimée’s home town Samois-sur-Seine is the location of the annual Django Reinhardt Festival. From singing in gypsy encampments as a child, to her scholarship to SUNY Purchase in the early 2000s, to winning the first Sarah Vaughan Vocal Competition in 2012, and with a robust career since, Aimée has charmed, cooed and belted out classic jazz for modern ears, building a repertoire that makes the listener lean forward and want more.

Given the French alliance in the Revolutionary War, we thought this Airmen of Note – Cyrille Aimée performance would be a good way to begin the week headed into the Fourth of July. Later this year, KUVO will carry the Airmen of Note concert with Branford Marsalis.

Don’t miss On Stage with host Susan Gatschet every Sunday when you tune in at 4:00 p.m. only on KUVO Jazz.

The U.S. Air Force Airmen of Note with Cyrille Aimée