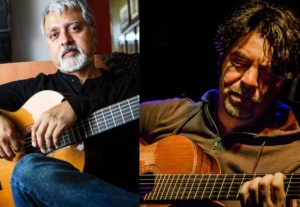 Caffe Sole presents Fareed Haque and Goran Ivanovic guitar virtuoso concert on Friday, January 24 at 7pm. Fareed Haque is a modern guitar virtuoso. Steeped in classical and jazz traditions, his unique command of the guitar and different musical styles inspire his musical ventures with tradition and fearless innovation. One of the most versatile, skilled, and curious musicians in Chicago, guitarist Goran Ivanovic has built a career built upon exploration.

They recorded two CDs together, “Macedonian Blues” and “7 Boats”, to great critical acclaim, even getting the nod as top best acoustic guitar albums 2004 from Acoustic Guitar magazine. Both have been so busy that they have not been able to play again together for years.
Inspired by the rhythms and melodies of flamenco, jazz, classical, rock and the Balkan region, this performance features their music which is carefully balanced between blazing virtuosity and sheer beauty.

The Bar at Plaza 38—June Line-up