February CD of the Month 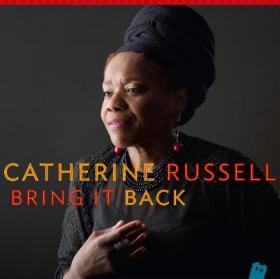 For over 20 years Catherine Russell toured the world as a backup singer for some of the most prominent names in music;

Steely Dan, Boz Scaggs, Paul Simon, Michael Feinstein, David Bowie, Cyndi Lauper and Rosanne Cash are just some of the outstanding performers she has accompanied. In 2006 Cat decided to finally record her first outing as a leader, in my opinion, long overdue, after all, she is the daughter of dual royal music heritage. Her father, Luis Russell was the Panamanian pianist and music director for Louis Armstrong’s group in the 1930s, before he embarked on his own as a band leader. Mr. Russell won a lottery that enabled him to relocate to the US, his first residence was New Orleans and then New York City. Catherine’s mother, the late Carline Ray was a gifted bassist-guitarist and vocalist for many important bands including the famous International Sweethearts of Rhythm, an integrated all female ensemble of the 1940s.  Ms. Ray was 87 years of age when Catherine insisted she record her first album which Russell produced, just months before her mother passed away in 2013.

For her 5th album, Cat chose some classic under recorded songs from the Jazz Age and Swing Era, injected them with modern sensibilities without losing their essence, and is accompanied by a superb 10 piece group. Add Catherine’s brilliant vocal approach and you have what I am certain is her best recording to date, moreover it is aptly titled, Bring It Back for Jazz Village. Ms. Russell is a graduate of the American Academy of Dramatic Arts and is also a GRAMMY® winner. The native New Yorker garnered the coveted award for her participation on HBO’s Boardwalk Empire sound track; moreover, she is heard singing in the film, Kill Your Darlings. A superlative singer, a sensational songbook, magnificent  musical accompaniment all blended together brilliantly, the results are clear, after you hear Catherine Russell’s Bring It Back, you’ll be bringing it back to your player for frequent listening!