Whatever you do, don’t refer to multi-instrumentalist Clarence “Gatemouth” Brown as a bluesman, although his imprimatur on the development of Texas blues is enormous. You’re liable to get him riled. If you must pigeonhole the legend, just call him an eclectic Texas musical master whose interests encompass virtually every roots genre imaginable.

Brown learned the value of versatility while growing up in Orange, TX. His dad was a locally popular musician who specialized in country, Cajun, and bluegrass — but not blues. Later, Gate was entranced by the big bands of Count Basie, Lionel Hampton, and Duke Ellington (a torrid arrangement of “Take the ‘A’ Train” remains a centerpiece of Brown’s repertoire). Tagged with the “Gatemouth” handle by a high school instructor who accused Brown of having a “voice like a gate,” Brown has used it to his advantage throughout his illustrious career. (His guitar-wielding brother, James “Widemouth” Brown, recorded “Boogie Woogie Nighthawk” for Jax in 1951.) More courtesy of AllMusic.com 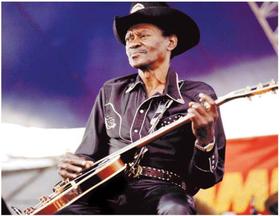