Herbie Hancock is a true icon of modern music. Throughout his explorations, he has transcended limitations and genres while maintaining his unmistakable voice. With an illustrious career spanning five decades and 14 Grammy® Awards, including Album of the Year for River: The Joni Letters, he continues to amaze audiences across the globe.

There are few artists in the music industry who have had more influence on acoustic and electronic jazz and R&B than Herbie Hancock. As the immortal Miles Davis said in his autobiography, “Herbie was the step after Bud Powell and Thelonious Monk, and I haven’t heard anybody yet who has come after him.” 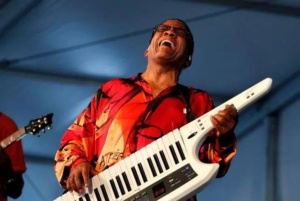 Born in Chicago in 1940, Herbie was a child piano prodigy who performed a Mozart piano concerto with the Chicago Symphony Orchestra at age 11. He began playing jazz in high school, initially influenced by Oscar Peterson and Bill Evans. He also developed a passion for electronics and science and double-majored in music and electrical engineering at Grinnell College.

In 1960, Herbie was discovered by trumpeter Donald Byrd. After two years of session work with Byrd as well as Phil Woods and Oliver Nelson, he signed with Blue Note as a solo artist. His 1963 debut album, ‘Takin’ Off’, was an immediate success, producing the hit “Watermelon Man.”
More on Herbie!