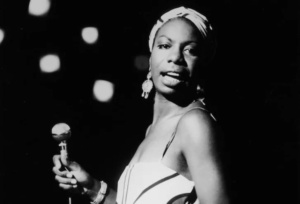 Nina Simone was born on February 21, 1933 in Tyron, North Carolina. She was known for using her musical platform to speak out. “I think women play a major part in opening the doors for better understanding around the world,” the “Strange Fruit” songstress once said.

The American singer created urgent emotional intensity by singing songs of love, protest, and Black empowerment in a dramatic style, with a rough-edged voice.

1. Nina Simone was her stage name
The singer was born as Eunice Waymon but by age 21, the North Carolina native was going by a different name at her nightly Atlantic City gig: Nina Simone. She hoped that adopting a different name would keep her mother from finding out about her performances. “Nina” was her boyfriend’s nickname for her at the time. “Simone” was inspired by Simone Signoret, an actress that the singer admired.

2. Nina Simone came from humble beginnings.
There’s a reason that much of the singer’s music had gospel-like sounds. Simone—the daughter of a Methodist minister and a handyman—was raised in the church and started playing the piano by ear at age 3. She got her start in her hometown of Tryon, North Carolina, where she played gospel hymns and classical music at Old St. Luke’s CME, the church where her mother ministered. After Simone died on April 21, 2003, she was memorialized at the same sanctuary.

3. Nina Simone was a star student.
Simone, who graduated valedictorian of her high school class, studied at the prestigious Julliard School of Music for a brief period of time before applying to Philadelphia’s Curtis Institute of Music. Unfortunately, Simone was denied admission. For years, she maintained that her race was the reason behind the rejection. But a Curtis faculty member, Vladimir Sokoloff, has gone on record to say that her skin color wasn’t a factor. “It had nothing to do with her…background,” he said in 1992. But Simone ended up getting the last laugh: Two days before her death, the school awarded her an honorary degree.

5. Nina Simone’s career was rooted in activism.
At the age of 12, Simone refused to play at a church revival because her parents had to sit at the back of the hall. From then on, Simone used her art to take a stand. Many of her songs in the ’60s, including “Mississippi Goddamn,” “Why (The King of Love Is Dead),” and “Young, Gifted and Black,” addressed the rampant racial injustices of that era.

Unfortunately, her activism wasn’t always welcome. Her popularity diminished; venues didn’t invite her to perform, and radio stations didn’t play her songs. But she pressed on—even after the Civil Rights Movement. In 1997, Simone told Interview Magazine that she addressed her songs to the third world. In her own words: “I’m a real rebel with a cause.”

6. One of Nina Simone’s most famous songs was banned.
“Mississippi Goddam,” her 1964 anthem, only took her 20 minutes to an hour to write, according to legend—but it made an impact that still stands the test of time. When she wrote it, Simone had been fed up with the country’s racial unrest. Medger Evers, a Mississippi-born civil rights activist, was assassinated in his home state in 1963. That same year, the Ku Klux Klan bombed a Birmingham Baptist church and as a result, four young black girls were killed. Simone took to her notebook and piano to express her sentiments.

“Alabama’s gotten me so upset/Tennessee made me lose my rest/And everybody knows about Mississippi Goddam,” she sang.

Some say that the song was banned in Southern radio stations because “goddam” was in the title. But others argue that the subject matter is what caused the stations to return the records cracked in half.

7. Nina Simone never had a number one hit.
Nina Simone released over 40 albums during her decades-spanning career including studio albums, live versions, and compilations, and scored 15 Grammy nominations. But her highest-charting (and her first) hit, “I Loves You, Porgy,” peaked at #2 on the U.S. R&B charts in 1959. Still, her music would go on to influence legendary singers like Roberta Flack and Aretha Franklin.

8. Nina Simone used her style to make a statement.
Head wraps, bold jewelry, and floor-skimming sheaths were all part of Simone’s stylish rotation. In 1967, she wore the same black crochet fishnet jumpsuit with flesh-colored lining for the entire year. Not only did it give off the illusion of her being naked, but “I wanted people to remember me looking a certain way,” she said. “It made it easier for me.”

9. Nina Simone had many homes.
New York City, Liberia, Barbados, England, Belgium, France, Switzerland, and the Netherlands were all places that Simone called home. She died at her home in Southern France, and her ashes were scattered in several African countries.

10. Nina Simone had a famous inner circle.
During the late ’60s, Simone and her second husband Andrew Stroud lived next to Malcolm X and his family in Mount Vernon, New York. He wasn’t her only famous pal. Simone was very close with playwright Lorraine Hansberry. After Hansberry’s death, Simone penned “To Be Young, Gifted and Black” in her honor, a tribute to Hansberry’s play of the same title. Simone even struck up a brief friendship with David Bowie in the mid-1970s, who called her every night for a month to offer his advice and support.

11. You can still visit Nina Simone in her hometown.
In 2010, an 8-foot sculpture of Eunice Waymon was erected in her hometown of Tryon, North Carolina. Her likeness stands tall in Nina Simone Plaza, where she’s seated and playing an eternal song on a keyboard that floats in midair. Her daughter, Lisa Simone Kelly, gave sculptor Zenos Frudakis some of Simone’s ashes to weld into the sculpture’s bronze heart. “It’s not something very often done, but I thought it was part of the idea of bringing her home,” Frudakis said.

12. You’ve probably heard Nina Simone’s music in recent hits.
Rihanna sang a few verses of Simone’s “Do What You Gotta Do” on Kanye West’s The Life of Pablo. He’s clearly a superfan: “Blood on the Leaves” and his duet with Jay Z, “New Day,” feature Simone samples as well, along with Lil’ Wayne’s “Dontgetit,” Common’s “Misunderstood” and a host of other tracks.

13. Nina Simone’s music is still being performed.
Nina Revisited… A Tribute to Nina Simone was released along with the Netflix documentary in 2015. On the album, Lauryn Hill, Jazmine Sullivan, Usher, Alice Smith, and more paid tribute to the legend by performing covers of 16 of her most famous tracks.