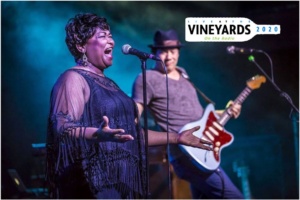 The first large band to play for KUVO’s Signature event was the Hazel Miller Band in 2007. Colorado based music icon Hazel Miller has a reputation for “Bringing it” whether the event is a club setting, festival, or fundraiser!

Miller was born in Louisville, Kentucky where she began singing professionally at the age of 15. She sang backup for Al Green, and opened for Mel Tormé and Lou Rawls. In 1984, while relocating to Los Angeles with her two children, Miller’s rental truck broke down in Denver, and she decided to stay … a review called her ‘a force of nature,’ and her voice called powerful! The band is now named “Hazel Miller and the Collective,” where you can get a bit of soul, blues, jazz and more.

The Gourmet Feast—Support our Local Restaurants

Live at the Vineyards—On the Radio