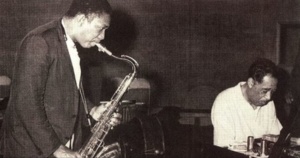 It’s Jazz perfection in under an hour. A rare gem of an album if ever there was one. Many consider it one of the finest albums ever made by the principals or by anyone playing Jazz. The eponymous album was recorded in one session on September 26, 1962. Ellington was 63 and Coltrane had celebrated his 36th birthday three days earlier. It was released in February 1963.

“The only time I had the privilege of working with John Coltrane was on a record date. It was a very interesting session. We recorded some of his tunes with his rhythm section, and some of mine with my rhythm section. No hassle, no sweat—- John Coltrane was a beautiful cat. The date flowed so smoothly we did the whole album in one session, and that is rare. I loved every minute of it.” (From his book “Music is My Mistress.” by Duke Ellington)

“I was really honored to have the opportunity of working with Duke. It was a wonderful experience. He has set standards I haven’t caught up with yet. I would have liked to have worked over all those numbers again, but then I guess the performances wouldn’t have had the same spontaneity. And they mightn’t have been any better.” (John Coltrane from the liner notes of the album.)

The first song on the record is Duke’s classic 1935 composition  “In a Sentimental Mood” and it features the mixed rhythm section of Elvin Jones on drums and the Ellington stalwart Aaron Bell on the bass. The only recording of this quartet in existence. A priceless collaboration and masterclass for the ages. As soon as Trane appears with Duke’s poignant piano you know the album will be unforgettable.

The rest of side one is Trane and Duke’s mastery of the blues featuring Ellington’s “Take the Coltrane” with Coltrane’s rhythm section and “Stevie” also written by Ellington with Duke’s redoubtable drummer Sam Woodyard and bassist Bell. Sandwiched between them is Trane’s only composition on the album “Big Nick” and it’s the only song on the record to feature Coltrane on soprano saxophone, amazingly in just his second year of playing an instrument he would come to revolutionize.

Side two begins with Ellington’s long time collaborator Billy Strayhorn’s song “My Little Brown Book” with such sympathetic playing by all the musicians that you’d swear they were all there when it was written.

A true highlight among classics is Ellington’s jaunty “Angelica” which features a calypso blues shuffle from Elvin Jones subtly powerful drumming that drives the time in a way Ellington hadn’t expected. The album ends with a song that jazz writer Murray Horowitz said “could be the title of the whole album…

“The Feeling of Jazz” It is INDEED!

This album is in my top five Jazz recordings! Only one album of music from two of the music’s most influential geniuses together. Seven songs that stand out among the hundreds of recordings by Ellington and Coltrane.