On the last week of Jazz Appreciation Month we celebrate the collaboration of Cal Tjader & Eddie Palmieri. 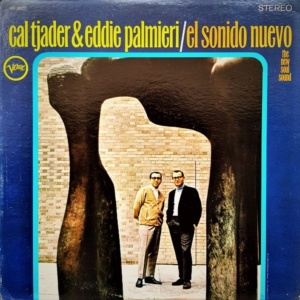 Cal Tjader began his outstanding career as a straight-ahead drummer and vibraphonist in the late 1940s in San Francisco where he was raised after being born in St. Louis, among many Cal played with Stan Getz and recorded an LP with him, In the mid-1950s he was on tour in New York and decided to go to the Palladium to see what all the buzz was about with the mambo being played there. After seeing the Machito Afro-Cuban Orchestra and the Tito Puente Band play live, he returned to San Francisco and founded his Latin jazz ensemble that led him to become the most important and influential non-Latino of Latin jazz.

Eddie Palmieri grew up in the Bronx under the tutelage of his older brother Charlie who was a sought out pianist who played with all the major groups if New York, Eddie liked playing bongo but soon realized that he was a better piano player, however that experience led to him earning his nickname Rompe Teclas or keys buster because of his percussive-pounding style on the piano.

In the mid-1960s Eddie and Cal forged a friendship that made them decide to collaborate and record an LP together. One obstacle had to be overcome, Eddie was signed to Tico Records and Cal was signed to Verve. The executives at Verve would not grant Cal permission to record for another label so Eddie and Cal came up with the solution. They would record 2 LPs, the first for Verve and the follow up for Tico Records. Verve agreed to this arrangement which is why we have 2 excellent collaborations between Palmieiri and Tjader. The 1966 Verve recording with Cal getting top billing is: El Sonido Nuevo-The New Soul Sound and the sequel in 1967 for Tico with Eddie receiving top billing: Bamboleate.