Check out Hancock and Washington at The Met in Philadelphia on August 4, 2019, we’re sure you’ll agree that this collaboration is unique with an icon like Hancock, and with Washington’s progressive, improvisational music that opens the door for young audiences to experience jazz!

With Hancock, a 14-time Grammy-winning pianist and NEA Jazz Master, there are few artists in the music industry who have had more influence on acoustic and electronic jazz and R&B. Herbie Hancock remains where he has always been, in the forefront of world culture. As the immortal Miles Davis said in his autobiography, “Herbie was the step after Bud Powell and Thelonious Monk, and I haven’t heard anybody yet who has come after him.” He received his first gold record in 1974 with Head Hunters, the self-titled debut by his new jazz-funk band. Herbie celebrated his 80th birthday on April 12. 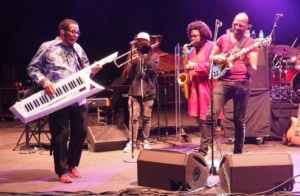 Washington’s path to connect younger listeners to experience music unlike anything they had heard before and exceeded any notions of what ‘jazz’ music is. His work with other influential artist such as Kendrick Lamar, John Legend, Run the Jewels, and the creation of “Harmony of Difference,” a standalone multimedia installation at the 2017 biennial of the Whitney Museum of American Art in New York City is notable. Washington is the key figure in what has lately been touted as a jazz resurgence in popular culture. In June of 2018 he released Heaven and Earth to wide praise. The album garnered ‘best of’ awards from Pitchfork, NPR, Variety, GQ, MOJO and Complex among others. And landing at No. 12 on the NPR Music Jazz Critics Poll.