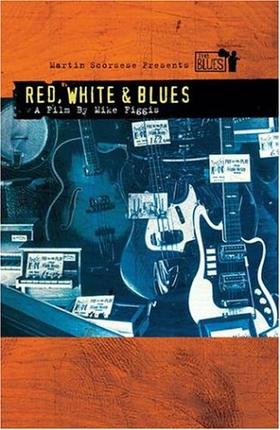 “I don’t know how far the ripple effect [of our influence] spread, but Robert Johnson is a household name now.”  – Eric Clapton

In the crowded studio of Abbey Road, with the film crew walking in the back of the shot, a small studio band is assembled. We notice Jon Cleary at the piano, along with Jeff Beck on guitar, and Peter King on tenor. As they break into a smoking version of Howlin’ Wolf’s “300 lbs. of Joy” up steps Van Morrison to the microphone and belts out his best vocals. Later, we’re treated to world famous musicians, but unlikely blues singers, Tom Jones and LuLu astonish with their blues chops. There is a loose sense of pleasure between the musicians as they glide through the choruses, each leaving their mark. Clearly they are having a ball.

So begins Chapter Six of the seven-part PBS series “The Blues” that executive producer Martin Scorsese put together in 2003.Two years after the massive Ken Burns series “Jazz,” Scorsese invited six other highly regarded directors to create stories of the Blues. Clint Eastwood took on piano blues and interviews living legends Jay McShann and Pinetop Perkins and Ray Charles. German director Wim Wenders looked at the careers of Skip James, Blind Willie Johnson and J.B. Lenoir. Director Mike Figgis’ documentary “Red, White & Blues” centered on the influence the blues had on British musicians and in turn how their reverence and interpretations contributed to expanding its worldwide audience. In the spirit of the best musical documentaries, “Red, White & Blues” is a great balance between oral history, archival footage, and stirring live music.

The film begins with a chronological oral history of the place of the blues in Britain, starting with the post-war 40s with big bands as the pop music of the day. Still living bandleaders such as Humphrey Lyttleton, George Melly, and Chris Barber discuss their careers and agree that it was Lyttleton’s cover of Bessie Smith’s “Evil Gal Blues” that was the first appearance of the blues in England and that charted as a hit record. They tell stories about a colorful contemporary Ken Colyer who revived New Orleans traditional jazz, going so far as to jump ship while in the service and find his way to live in New Orleans and learn from the masters. Throughout the film we hear from rabid record collectors and self-appointed historians who became great musicians, such as John Mayall, Eric Clapton, Georgie Fame, and Peter Green. They reflect on their earliest experiences listening to records, seeing live performances, and learning to play their instruments.

The arrival in England of Big Bill Broonzy, billed as the Last of the Mississippi Delta Bluesmen, in 1950 or ‘51 was really the start of the British blues revival. He appeared live on British television and toured concert halls. He opened the door to many other Americans to follow. It’s fun to listen to people like Clapton, Eric Burden, and Steve Winwood talk about their first time seeing Big Bill, or Sister Rosetta Tharp, or Sonny Boy Williamson as teenagers and the profound effect it had on them. In no time they were the backing bands for their British or European tours. They also recall the nightclubs, some of which catered to West Indians and American’ G.I.s where they dared to go to hear the likes of Nina Simone, or John Lee Hooker. John Mayall and Clapton recall record listening parties they held where Freddie King and Lee Morgan, Howlin’ Wolf and Horace Silver all had equal time. Another mechanism for their continuing education was with the American Forces Network (with Willis Conover). And as the camera turns to allow Georgie Fame or Tom Jones to sing, you can hear how the years have burnished their voices like fine wine to bring greater depth and feeling to the lyrics. One of the real pleasures watching this film are the small moments where the camera lingers on Tom Jones and Jeff Beck sitting alone in the studio listening to a small boom box and playing and singing along to Ray Charles or Howlin’ Wolf. You can see the sheer joy they feel connecting in that unguarded instant.

The 1960s and the British explosion back into the States is well-known to music fans. Rock venues like the Fillmore East and West booked bands like the Cream or Fleetwood Mac who shared the stage with Albert King or Buddy Guy and therefore introduced them to a new generation and a new demographic of blues fans. Say what you will about the Rolling Stones appropriating black culture and/or Led Zepplin avoiding royalties, it is also a fact that had it not been for these British bands, most of the bluesmen would have languished in tiny clubs in their own neighborhoods and never had any international fame and the accompanying quality of life. B.B. King makes a point of thanking them for the longevity of his career. The film never talks about the exploitation overtly, but it is clear from each person interviewed just how sincere they were in their deep love and reverence for this music and for their influences. The concluding footage of Lula absolutely crushing ‘Drown In My Own Tears’ is testament to that. To learn the history, hear the stories, and experience how great this music still is, “Red, White & Blues” does not disappoint.

(Editor’s note: “Red, White & Blues” is available at Amazon and on Netflix, as well as finer video rental establishments, of which there are few.  Also, Hip-O Records put out an accompanying audio CD with 20 tracks from a few blues masters themselves and adoring British artists.  KUVO intern Chris Bjork helped edit the web audio posted below.)