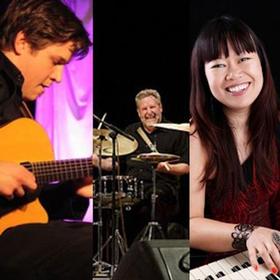 Jeff Hamilton, influenced by his parents big band records at a young age, was inspired to at age eight to begin playing drums to the records of the great Oscar Peterson. Today he is featured with some of the top names in jazz and pop on more than 200 recordings, 22 of which received Grammy® nominations. He also performs and records frequently with his own trio and as co-leader of the Clayton-Hamilton Jazz Orchestra. more

Akiko Tsuruga has been a regular on the New York jazz scene as a B3 player since her arrival in 2001. Almost immediately, she began working with artists like Jimmy Cobb, Frank Hess, and Lou Donaldson, whose quartet she joined in 2007. As a bandleader, she has toured internationally and released several acclaimed albums, garnering extensive radio play and “rising star” designations in DownBeat reader’s polls.

Graham Decheter, an accomplished guitarist, composer and arranger, plays with the kind of swinging authority and seasoned maturity that belies his young age. The 26-year-old Los Angeles native, a member of the Clayton-Hamilton Jazz Orchestra since he was 19, shows a deep reverence for the jazz guitar tradition in his warm-toned renditions of ballads, bossas, bebop and blues. A formidable soloist and consummate accompanist, he imbues standards with rare enthusiasm and an inherent bluesiness while carving out his own path with several affecting original compositions. more