Famed Panamanian pianist Danilo Pérez brings his trio tribute to Thelonious Monk to Denver Wednesday and Thursday this week, and KUVO listeners will get to hear the first set LIVE!!  Be sure to tune in Wednesday, October 4 at 6 p.m. for this exclusive broadcast engagement from Dazzle @ Baur’s in downtown Denver.

Thelonious Monk is universally regarded as one of jazz’s greatest icons and his enduring influence is still paramount today, one hundred years after his birth. As a performer and innovator, Danilo Pérez has made his own considerable mark in the genre. NPR exclaims, “Pérez is a man with some serious jazz cred. The Panamanian pianist got his start playing with Dizzy Gillespie, and continued with Wayne Shorter. As a composer and bandleader himself, he’s practically peerless.” Twenty years ago, Pérez recorded an album celebrating Monk’s legacy.

On Panamonk, Pérez explored Monk’s music and style through a contemporary jazz lens…adding a bit of his own personal Panamanian flair. The New York Times called it “a masterpiece of jazz synthesis,” and said, “Mr. Pérez’s approach was refreshing in its irreverence: rather than try to be as faithful as possible to Monk’s distinctive rhythms and harmonies, he used Monk’s vision as a jumping-off point for his own individuality as an improviser.” Now, in celebration of Monk’s centennial, Pérez revisits Panamonk and brings his fresh take on the music to today’s audiences.

Pianist, composer, educator and social activist, Danilo Pérez is among the most influential and dynamic musicians of our time. more 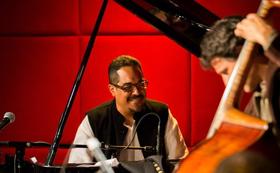