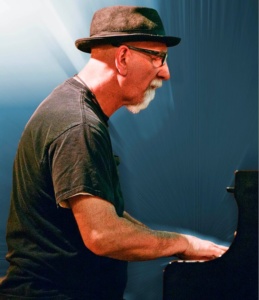 Jeff Jenkins is one of the busiest musicians on the Front Range, with good reason. He plays piano and he plays the B3 organ; he composes, and he teaches at the University of Colorado at Boulder as well as for the CCJA (Colorado Conservatory for the Jazz Arts). His years of experience have created in him one heck of a top-flight musician.

Jeff was raised in Nebraska City, Nebraska. Jeff’s father was a music school teacher and a middle school music director, playing Dixieland style trumpet. Of course, young Jeff took an interest in music but naturally pursued other sounds and other instruments. He dabbled in piano since he was 6 years old, adding trombone, drums, guitar, and vocals to the mix until in high school he decided he could master piano.

Nebraska is not known for being a great incubator for jazz musicians, and Jeff was hungry for some help. After high school, he attended Midland Lutheran College, where he studied classical. After 3 semesters, his father sent him to the Jamie Abersold jazz camp, where he met Joe Henderson, Rufus Reid, and especially Dan Haerle, whose influence made Jeff decide to attend North Texas State University, where Haerle would be his piano instructor. This one-week camp changed his life.

Classical education continued at North Texas State, which has long been recognized for its music program. While reading sheet music was a challenge for him at the time, Jeff feels that classical training helped him immensely while he grew his jazz chops at North Texas. For Jeff, learning to play jazz was much easier, as he had developed a sense of harmony, etc., at a young age. At North Texas, he played in big bands and small groups. After graduation, he was hired for a Fort Collins band named Kinesis with whom he recorded at Caribou Ranch.

He moved back to Dallas for a couple of years to work more with his acquaintances from the University but found himself still wanting more in jazz. What does a guy in this position do? Well, he moves to New York City!

We can all thank the Big Apple for what it has done for Jeff! He played with such luminaries as Dave Douglas, Chris Botti, Chuck Mangione. He played the Blue Note and Visiones, where many big bands got their start. He played the off-Broadway hit “Little Shop of Horrors.” He studied with Kenny Barron, Richie Beirach, and Fred Hersch.

In 1990, his then-wife, an actress, was hired in Denver. By then, after 10 years in NY, Jeff was pretty burned out in the New York scene and said, “What the heck. Let’s see what Denver has for me, too.” And Denver surprised him for sure! He was able to give up those soul-sucking but well-paying wedding and corporate gigs and devote his energy to jazz. He was amazed at the high level of jazz musicianship in Denver, which he adds, continues to rise, now having great jazz music programs in five area colleges.

Other than a two-year stint travelling with the show The Who’s Tommy, he has continued to work in Denver and looks back with satisfaction. For instance, in New York City, a club like Bradley’s regularly hires pianists the likes of Cedar Walton, Tommy Flanagan, Paul Bley. In Denver, Jeff gets these plum gigs. The best New York pianists, because of their sheer number, must travel to work steadily. In Denver, he can teach and play without those stresses. It was here in Denver where Jeff got to play with his idols like Freddie Hubbard, Eddie Harris, Clark Terry, Dakota Staton, the Count Basie Orchestra, and on and on.

For quite some time, he had a recording studio in Denver which gave him the chance to produce, record, and sound engineer music. He loved the community part of that endeavor, but it took too much time away from being a musician. He’s a musician first!

He has recorded under his own name and as back-up for many greats. He is on Brad Goode’s Nature Boy, Polytonal Dance Party, and Chicago Red. Currently, he has an organ trio called The Organization with In Blue, a CD that was self-released, and The Arrival, which was released under Origin Records. The Arrival was recorded live with no overdubs and is as close to a live performance as you can get. It gets lots of airplay on KUVO.

Watch for Jeff Jenkins at streamed live performances as we get back to normal!

Image on this page by Jack Sasson