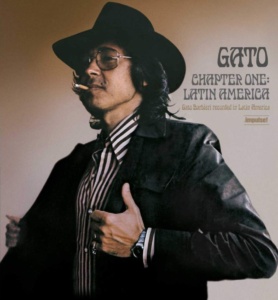 Encuentros: (12:25) by Gato Barbieri from Chapter One: Latin America
When Gato Barbieri signed to Impulse! Records in 1973 for a series of critically lauded albums, he had already enjoyed a celebrated career as a vanguard musician who had worked with Don Cherry and Abdullah Ibrahim (then known as Dollar Brand), recorded for three labels as a leader, and scored and performed the soundtrack to director Bernardo Bertolucci‘s film Last Tango in Paris. Chapter One: Latin America was a huge step forward musically for the Argentinean-born saxophonist, even as it looked to the music of his heritage. The enormous host of musicians on the date played everything from wooden flutes to electric and acoustic guitars, bomba drums and quenas, and Indian harps and charangos, creating a passionate and deeply emotive sound that echoed across not only miles but also centuries. At the helm was Barbieri, playing in his rawest and most melodic style to date, offering these melodies, harmonies, and rhythms as a singular moment in the history of jazz. While the entire album flows seamlessly from beginning to end, the A-side, comprised of Barbieri‘s own “Encuentros– is a work of such staggering drama and raw beauty that it is perhaps the single highest achievement in Barbieri‘s recorded catalog as an artist. Simply put, this album, like its remaining chapters, makes up one of the great all but forgotten masterpieces in 1970s jazz. Thankfully, Verve has brought this set back into print on CD as part of its wonderfully mastered. 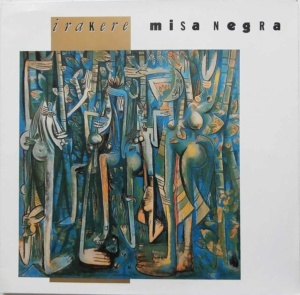 Misa Negra: The Black Mass (17:34) by Irakere
Many of the top Cuban jazz musicians have played in Irakere during the past several decades, including altoist Paquito D’Rivera and trumpeter Arturo Sandoval before both individually defected. Pianist Chucho Valdes has been the orchestra’s longtime leader, and its music ranges from Latin jazz and bop to Cuban folk melodies, with an emphasis on infectious rhythms and advanced improvisations. Misa Negra (Black Mass), the Cuban 9th Symphony, created in 1969 by Chucho Valdés, and played for the first time at Warsaw’s Congress Hall during the Jamboree Jazz Festival, Poland, October 29th, 1970, marked a before-and-after reference in the musical concerts all over the world.

“When I composed that piece and played it for the first time, I already knew what I intended to do, it comprised all the ideas I had developed in the mid of my youth when I was only 27 years old. I felt the need of talking about the roots, as a result of a deep study of the ancient Yoruba masses. I observed how the original Yoruba masses were, the way in which the slaves used to hold them. I reproduced those roots with my own ideas that were kept very authentically. I’m talking about more than four decades ago.” 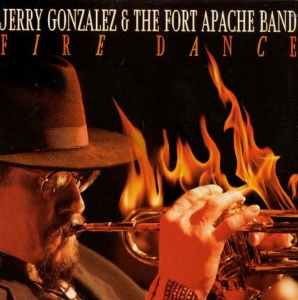 Isabel the Liberator (15:35) by Jerry Gonzalez & The Fort Apache Band from the live recording Fire Dance
Jerry González June 5, 1949 – October 1, 2018 was an American bandleader, trumpeter and percussionist of Puerto Rican descent. Together with his brother, bassist Andy González, he played an important role in the development of Latin jazz during the late 20th century. During the 1970s, both played alongside Eddie Palmieri and in Manny Oquendo’s Conjunto Libre, and from 1980 to 2018 they directed The Fort Apache Band. From 2000 to 2018, Jerry González resided in Madrid, where he fronted Los Piratas del Flamenco and El Comando de la Clave. In October 2018, he died of a heart attack after a fire in his home in Madrid. In 1979, González published his first album as a leader: Ya yo me curé. Soon he formed his best-known group, The Fort Apache Band, which included his brother Andy and Kenny Kirkland, Sonny Fortune, Nicky Marrero, Milton Cardona, Papo Vázquez, Wilfredo Velez, and Jorge Dalto. The ensembles’ first two albums were recorded live at European jazz festivals, The River is Deep in 1982 in Berlin and Obatalá in 1988 in Zurich. These were followed by their hit album, Rumba Para Monk, in 1988, earning them recognition from the French Academie du Jazz with the Jazz Record of the Year award. This was the record that caught the ears of the jazz community and is still considered a stellar project. After that, the 15 member band was compressed into a sextet: Larry Willis piano, Andy González bass, Steve Berrios drums, and Carter Jefferson saxophone, and Joe Ford saxophone. González and the group continued their creations on the 1996 album Fire Dance, recorded live at Blues Alley, and featuring interpretations of Thelonious Monk songs Let’s Call This an Ugly Beauty, as well as original compositions. Their efforts were celebrated by winning a score of awards, including Best Jazz Group in Playboy Magazines Readers Poll for 1997. In 1998 they swept the Latin Jazz category at the New York Jazz Awards, winning both the Industry and Journalist Polls. In 1999 the group scored big with the critics and readers polls for Beyond Group of The Year in DownBeat Magazine.

Tune in to The Nightside with Andy O’ on Sunday night, October 10, from 8 to midnight.