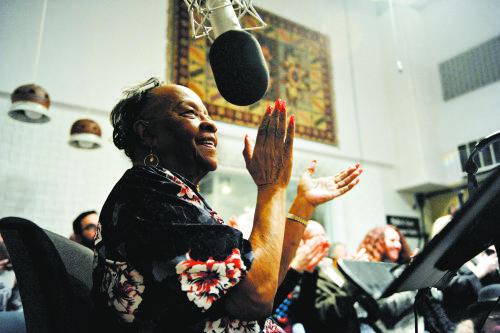 So don’t EVEN THINK ABOUT missing the Five Points Jazz Festival this Saturday, May 17. Join KUVO at the Main Stage at 5:45 to throw up your hands and give a big shout out to Justina “Mama Kat” Curlee as she is celebrated as one of this year’s honorees at the festival. She joins Willie “Bluesman” Houston and Neil “Puente Grande” Bridge for the 2014 additions.

Justine “Mama Kat” Curlee is one of the most popular radio personalities in Denver’s broadcasting history. She is a Denver native daughter named after the legendary Dr. Justina Ford.

Shortly after KUVO began broadcasting in 1985, one of J. C.’s friends hosting a show suggested to her that she get her own program. After a brief training process, Justina got her opportunity beginning on overnight Sundays. After moving days a few times, in 2000 she was given the Friday night “Rockin’ in Rhythm” show. It rapidly became one of the most popular shows of jazz89KUVO earning her a new moniker, “Mama Kat”.  Her success was in part due to her exquisite music tastes, but mostly because of her captivating personality. In January of 2014 “Mama Kat” hosted her final show bringing the curtain down on a superb radio career, Fridays nights on Denver radio will never be the same! Watch and listen to her “Send Off” Concert recorded live on KUVO from the Phyllis A. Greer Performance Studio.

Join the party this Saturday, May 17 for the 5 Points Jazz Festival! Come see us at the KUVO/RMPBS booth at the festival. For the first time, we will be broadcasting live from the street and with a food/beer garden.  Frijoles Colorado is serving Cuban food including roasting an entire pig and the Falling Rock Tap House Beer Trailer will be pouring six brews on tap. We’ll be just south of the Main Stage on the west side of Welton. A special thank you to KUVO’s festival sponsors Denver Water, Frijoles Colorado, and Falling Rock Tap House. The Five Points Festival is made possible by Arts and Venues Denver.

For a complete performance schedule and event details, visit our event page at kuvo.org.

Read the story on her by Lisa Kennedy “Long-time Denver DJ leaves jazz station KUVO” in The Denver Post.