March CD of the Month 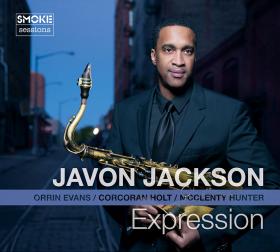 Our March selection is one of great pride for us, Javon Jackson was raised in Denver and maintains strong family connections to the Front Range. For over 20 years he’s been a globetrotting musician, both as an esteemed sideman and as a band leader.  Furthermore, Mr. Jackson is a respected educator currently holding the chair at the prestigious Jackie McLean Institute of Jazz at The University of Hartford’s Hartt School. Javon’s most recent release is Expression, recorded live at the Smoke Jazz Club in New York City issued by the upstart Smoke Sessions label.

For many years before moving to Boston to attend the Berklee College of Music where he obtained his Bachelor’s degree in music, Jackson honed his soulful saxophone stylings playing Denver’s noted El Chapultepec, in part mentored by the late Nat Yarbrough. While at Berklee and after graduation, he recorded and toured with Art Blakey & the Jazz Messengers, Freddie Hubbard, Betty Carter, Donald Bird, Les McCann and many other legends of jazz.

For his live performance at Smoke, “J.J.” chose his accompanying trio well,  the gifted pianist and leader of his own groups, Orrin Evans, the first call bassist-Corcoran Holt, and drummer McClenty Hunter who often tours with our own Tia Fuller.  The set begins with a tribute to Javon’s former bandleader, Art Blakey who recorded the original version of One by One, it concludes with a Jackson original, 88 Strong. In between there are other original tunes as well as soulful renditions of Don’t You Worry ‘Bout a Thing and Where is the Love. Summing it all up, this is a smoking night of music captured at the Smoke Jazz Club and released by Smoke Sessions, it’s the only kind of smoke that’s good for the ears!