May CD of the Month: “Songs Were Made to Sing” by Mary Stallings 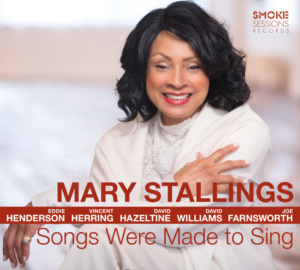 San Francisco native daughter Mary Stallings is one of the finest living jazz vocalists and an all-time great! Ever since her 1961 auspicious recording debut accompanied by Cal Tjader, Ms. Stallings has had a faithful following throughout the U.S. and around the world wherever fans of jazz vocals are found. Prior to her initial album, Mary was well established in the San Francisco jazz scene singing at various clubs often accompanied by legendary musicians like Earl “Fatha” Hines, Teddy Edwards and the Montgomery Brothers which led to her joining the Louis Jordan Tympany Five in the early 1960s. She was invited to sing at the Monterey Jazz Festival in 1965, from there she toured South America with the Dizzy Gillespie Band in 1965. Upon her return home she performed with Billy Eckstine in various casinos of Nevada before becoming a member of the Count Basie Big Band for several years touring throughout Europe and singing on 3 Basie recordings. Upon conclusion of her stint with the Count in the early 1970s, Stallings retired from music to raise her only daughter. In 1990 Mary returned to the recording studio releasing her second session as a leader followed by a steady flow of albums featuring some top shelf pianists, Gene Harris, Monty Alexander, Gerald Wiggins, Geri Allen and others.

Mary Stallings newest entry into her discography is her first for the Smoke Sessions Records label, Songs Were Made to Sing is a sterling collection of seldom recorded gems, originals and revitalized standards all performed in Mary’s unique vocal stylings. Naturally, she has a standout group of accompanying musicians led by pianist and arranger David Hazeltine. On alto and tenor is the talented saxophonist Vincent Herring and fellow S. F. Bay Area trumpet man, Eddie Henderson. Rounding out the ensemble are David Williams-bass, Joe Farnsworth-drums and on 2 tracks, Daniel Sadownick on percussion. This is one of those recordings I like to describe as “all-killer, no-filler”, every selection is a “good ol’ good one” be it a ballad, a medium tempo, Latin-esque or upbeat! Picking out a favorite song or 2 is difficult yet I lean towards the original Third Time is the Charm, Horace Silver’s Soul Mates but if painted into a corner, I’ll take Lover Man,  that wonderful standard written in part by Puerto Rican pianist-composer Roger ‘Ram’ Ramírez because David Hazeltine arranged the classic with a pleasant Latin jazz touch sure to make Ram smile. Mary Stallings received the 2006 San Francisco Jazz Beacon award and I was fortunate to be in San Sebastián, Spain in July of 2018 when Ms. Stallings-one of the headliners- received a Jazzaldia Lifetime Achievement plaque.  Mary admits that at times she has difficulty in expressing her feelings in words, nevertheless when it comes to her vocals, she has the unmistakable ability to get her emotions and points across most expressively, after all Songs Were Made to Sing and she sings songs so splendidly!

Click here to become a CD of the Month member and you’ll receive 13 CDs during your yearly membership.