Music is My Message: The Sound of Us and KUVO’s Membership Drive

We got a little more perspective on this question thanks to 12x Emmy-winner and Grammy-nominated record producer Chris Gero, the director of “The Sound of Us,” after attending the 40th annual Breck Film Fest in Breckenridge this past weekend. “The Sound of Us” is a music documentary predicated on the question “What is music, what is music to you?” The film was made during the height of Covid-19 in the summer of 2020, spanning over 5 countries and interviews a wide array of musical talents such as the Preservation Hall Jazz Band in New Orleans, Avery*Sunshine, Ben Folds, Francesco Lotoro, Grace Kelly, Bettye LaVette, Sarah McLachlan, and many more.

Fernando Pullum, also interviewed in the film, is the founder of the Fernando Pullum Community Arts Center in Los Angeles, California. He states that “Music is the great equalizer in life because it doesn’t matter what color your skin is, your gender, your level of economics, if you can play, you can play. We should teach people music because it makes them whole.” Fernando struggled with a tough upbringing and has dedicated his life to helping people with the same challenges he had – through teaching music. He believes with this musical pay it forward method, we can make profound changes in the world. 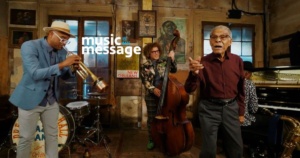 “What is music, what is music to you?”, is also answered in the film by members of the Preservation Hall Jazz Band in New Orleans. In the heart of the French Quarter in a time of racial segregation, Preservation Hall functioned as an art gallery while black musician’s portraits were painted as they performed. Charlie Gabriel of the Preservation Hall Jazz Band has been playing music in New Orleans since the early 1940s, in the film, he recounts his tales of playing with musical greats in NOLA. He is one of the last of the older musicians to have played with the older musicians and is adamant about preserving and protecting the music. Before putting on a fantastic musical performance of “Come With Me” in the film, Gabriel says “We got to have a musical conversation, so we cancel out all the complication.” Music to him in his own words is “it’s the most powerful thing we have that makes us human, that’s life and that’s music”.

Chris Gero interviewed countless musicians to shine a light on what music means to them, with responses that go much deeper than a single one-word answer. Music is the main character of the film according to Gero, and before premiering the film in Breckenridge, Gero (who is a musician first and foremost) explained that music is the great unifier, it doesn’t lie, and it breaks down everything from race to religion.

The Breck Film Fest may have concluded in person this past Sunday, but you can still enjoy the festival and watch The Sound of Us along with other core films, VIRTUALLY, through Sunday, September 26. Tickets and information can be found at Breck Film Fest.

So, what does music mean to you? Let us know on Facebook, Instagram, or email studio@kuvo.org, and tune in during KUVO’s Fall pledge drive Thursday, September 30 till Friday, October 8, where you’ll hear from all of our on-air talent on what music means to them.

Your support matters! Be a consistent part of making community, culture, and music happen – 24/7, year-round!