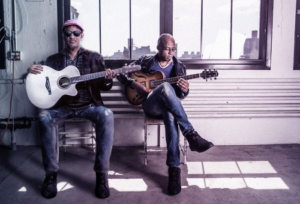 In 1964 the musical Fiddler on the Roof (a play that recently turned the Buell Theater into an early 20th-century Russian village) opened on Broadway. That same year “Cannonball” Adderley recorded the music from Fiddler with a sextet that included brother Nat on trumpet and Charles Lloyd on saxophone. Though this combination might sound a little strange, it worked extremely well for Adderley and company. Fiddler, a musical that perhaps produced more recognizable songs than any other play, proved that it could also produce the basis for strong jazz playing on the jazz side.

Beyond the music, the revival of this play that is old enough to live in a retirement community tells a tale of hatred in the form of anti-Semitism and the wave of immigration that so benefitted America. So what does all this have to do with the music on tap this week? In two words, the answer is Lionel Loueke who performs at Dazzle, 1512 Curtis, on Monday with fellow guitarist/vocalist Raul Midón. Loueke is a native of Benin, the small West African nation occupying the area associated with the famous Benin bronzes.

From Benin, Loueke, who was born in 1973, studied in the Ivory Coast and then Paris where he connected to jazz through exposure to George Benson. After that, he landed at the Berklee College of Music in Boston. From Berklee, Loueke joined Terence Blanchard’s band followed by an ongoing residence with Herbie Hancock’s group. Along with multiple recordings with Blanchard and Hancock, as well as Blue Note outings under his own name, Loueke has also recorded with fellow Benin native Angelique Kidjo.

As for Midón, the New Mexico native creates a full wall of sound with only his guitar and voice, though his current disc “If You Really Want” is with a full-blown Dutch orchestra led by Vince Mendoza. From Denver, the duo will land at Iridium in New York. But a trip to Dazzle at Baur’s will save you a lot of miles. The sets are at 6:30 and 9 p.m.

On Tuesday, the day after Loueke and Midón are on stage, Dazzle at Baur’s serves up the prolific, West Coast drummer Scott Amendola in a trio with guitarist Dave Devine and bassist Greg Garrison. Speaking of guitarists, Amendola has played with them all, from Bill Frisell, Pat Metheny and Nels Cline to Charlie Hunter and John Scofield. The trio plays at 7 and 8:30 p.m.

At 7 p.m. on Thursday and Friday, Dazzle has groups from the Colorado Conservatory for the Arts. Later on Thursday and Friday, the club on Curtis has its regular Dazzle Sessions led by the noted trumpeter Greg Gisbert and bassist Jean Luc Davis doing the music of Herbie Hancock (Thursday at 10:30 p.m) and the electronic trio Photon (Neal Evans, Dan Africano and James Dunstan Jr.) on Friday at 10 p.m. On top of all this, Dazzle also has the popular saxophonist/flutist Nelson Rangell on Saturday at 6 and 8:30 p.m. Rangell is one of the players in Colorado with an international reputation.

Also keep in mind the music at Nocturne, 1330 27th St., Tuesdays through Saturday that includes saxophonist Peter Sommer doing the Songs of Joy on Saturday starting at 6:30 p.m. (303-295-3333). Additionally, Neal Bridge is at the Augustana Arts music under the stars indoor concert on Friday at 7:30 p.m.