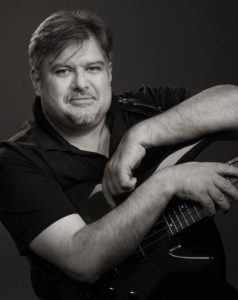 On Saturday, June 13, at 10pm, KUVO’s performance series “On Stage” features the bass work and legacy of Jimmy Trujillo. Known around town as “JT,” Jimmy Trujillo impacted the local music scene in a big way. He was a beloved KUVO on-air host as well.

JT played many times with various bands at KUVO’s Phyllis A. Greer Performance Studio. We’ve got Jimmy on bass with Media Noché from 2005 (Eric Trujillo, Andy Nevala, Mike Marlier, José Espino). In 2011, he put together a band named for his radio show at the time, the “Salsa Con Jazz” Ensemble, with 11 players including Dr. Walter Barr, Darren Kramer, Justin Adams, and others. Jimmy’s last performance recorded at KUVO was with Latitude – a septet tribute to Grover Washington, Jr. captured in September of 2014. We lost Jimmy suddenly to a heart attack in October 2014.

Join host Susan Gatschet for the Jimmy Trujillo Tribute on Saturday evening at 10 o’clock. “On Stage,” a KUVO exclusive!