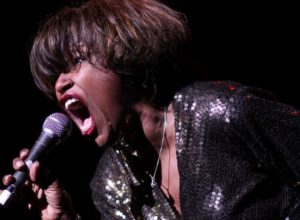 Her bona-fides include sharing the stage with B.B. King, Al Green, Delbert McClinton, Big Head Todd and more! In 2012, 2013, 2014 and 2016,Erica won the “Best Blues Singer-Female” Award from the Colorado Blues Society’s Members’ Choice Competition!  Her band appears regularly on Westword Magazine’s “Best of” list. Her soundtrack credits, collaborations and awards are many, including placing in the 2013 International Blues Challenge with Dan’ Treanor’s Afrosippi Band. Erica was dubbed “Denver’s Queen of the Blues” by the Altitude Network in their concert showcase feature.

We held on to a performance from 2004 at KUVO that blew us away. The Erica’s band was hot and the audience caught fire, too!  The session was so good one of the tracks made it to a “Live at the Oasis” CD.

Tune in to “On Stage” for a LIVE and LOCAL blues session, rebroadcast as it was performed from KUVO’s Phyllis A. Greer Performance Studio.  That’s Saturday, January 25 at 10pm.  “On Stage,” a KUVO Jazz exclusive!

On Stage: The Saxophone of Rich Chiaraluce