On Stage: The New Mastersounds! 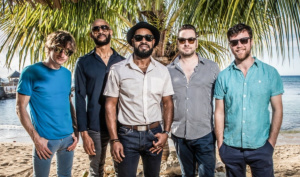 On Sunday, December 29th at 4 p.m., KUVO’s performance series “On Stage” features The New Mastersounds, in session at KUVO’s Phyllis A. Greer Studio during their recent Colorado tour.

Since its beginnings in Leeds, England in the late 1990’s, The New Mastersounds have been pushing out catchy rhythms, funky beats and soulful melodies to international acclaim  Guitarist Eddie Roberts founded the group with drummer Simon Allen. Now the band’s recorded catalogue boasts 26 7-inch singles, 13 studio albums, three live albums, a remix album and three compilation albums, released variously in UK, Japan, and USA – where they continue to tour extensively. Atlanta-based vocalist Lamar Williams Jr. was part of the Fall 2019 U.S. tour.  And The New Mastersounds latest release “Shake It” was recorded in Colorado for Roberts’ Denver-based Color Red Records.

The New Mastersounds turn up the heat on KUVO’s “On Stage,” in an encore presentation of their October 2019 visit to KUVO, produced originally for KUVO’s Funky Boombox program. Catch it this Sunday afternoon at 4 p.m.  “On Stage,” a KUVO exclusive!

On Stage—The Saxophone of Rich Chiaraluce

On Stage: The Music of Jimmy Bruno & Ben Sidran