On Stage: The U.S. Air Force Airmen of Note with Branford Marsalis 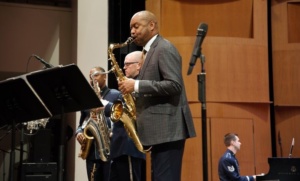 There are few careers in jazz as varied as that of Branford Marsalis, eldest brother of the famous Marsalis family of New Orleans.  (The Marsalis musicians – father Ellis Jr. and brothers Branford, Wynton, Delfeayo and Jason – were named NEA Jazz Masters en masse in 2011.)  Branford has toured with Sting and the Grateful Dead, and has performed classical works with the New York Philharmonic and Philharmonia Brasileira.  And he led the NBC Tonight Show band.  His discography includes more than 30 CDs in both jazz and classical genres.

“Mutual respect” might best describe the April 5, 2018 date with the U.S. Air Force Airmen of Note, finally arranged after years of trying to align schedules.  “Our Airmen are world-class artists themselves, so they don’t get jitters,” said Chief Master Sgt. Kevin Burns.  “They get jazzed about the opportunity to perform with these remarkable artists who inspire them.”

As to Branford’s approach to the engagement, “Branford wanted to come in and do new arrangements, new charts, and learn it on the fly as great jazz musicians are known to do,” Burns explained.

The result was “magical,” but you can hear it for yourself. On Stage, Sunday at 4:00 p.m. with host Susan Gatchet…only on KUVO Jazz.

On Stage: The Jazz Trio