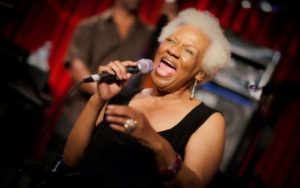 This Sunday, November 3rd, at 4 p.m., KUVO’s performance series “On Stage” features the music of vocalist Barbara Morrison. We’ve been privileged with a couple of visits from this talented jazz maven over the years, in November 2002 with the Summit Jazz All Stars, and in 2010 with Houston Person.

In 2002, Morrison was accompanied by players from the Summit Jazz Festival: Ricky Woodard (ts), Howard Alden (g), Eddie Higgins (p), Colin Gieg (b), and Jackie Williams (d). In 2010, Morrison was traveling with sax man Houston Person. For her Denver engagement she picked up Jeff Jenkins (p), Ken Walker (b), and Todd Reid (d).

Catch highlights from the one-of-a-kind Barbara Morrison with these top-flight performers as it was broadcast live from KUVO’s Phyllis A. Greer Performance Studio. That’s this Sunday afternoon with host Susan Gatschet at 4 p.m. “On Stage,” a KUVO exclusive!

On Stage—The Saxophone of Rich Chiaraluce