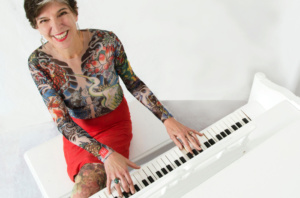 Tune in this Sunday, July 21, at 4 p.m., KUVO’s performance series “On Stage” kicks off its summer series of broadcasts recorded at Vail Square.  The season begins with Marcia Ball!

Marcia Ball returns to kick off this year’s Vail Jazz @ Vail Square series! Born in Texas, raised in Louisiana, her Texas boogies, swampy New Orleans ballads and groove-laden Gulf Coast blues are as real as it gets.  She attended Louisiana State University, delved into country rock, and moved to San Francisco, but her piano blues roots came calling.  “Once I found out about Professor Longhair,” recalls Ball, “I knew I had found my direction.”

With numerous national TV appearances, Grammy nominations, Music Halls of Fame (Gulf Coast, Louisiana) to her credit, and being named the 2018 Texas State Musician of the Year, she’s still blazing.  The singer-songwriter-pianist has traveled the world to venues as diverse as The White House, The Kennedy Center, and now Vail Square.  “Fifty years have passed in a flash,” says Ball in her trademark husky, knowing voice.

It’s Marcia Ball from Vail Jazz at Vail Square on KUVO’s performance archive show “On Stage,” Sundays at 4:00 p.m. only on KUVO Jazz.

On Stage—Harold Mabern and Eric Alexander