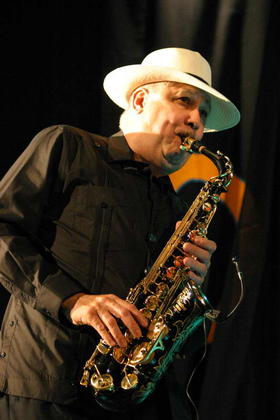 Jazz, pass it on.That was a big part of what happened last Friday night at the Mount Vernon Country Club.

National Endowment of the Arts Jazz Master and 15-time Grammy Award winner Paquito D’Rivera led an ensemble of primarily college students in an evening of Latin Jazz. The groove was solid, the song selection impeccable and the learning experience priceless.

The jazz program at the University of Colorado at Boulder was the specific beneficiary of D’Rivera’s visit. The student leader of the band, pianist Walter Gorra, doubles as a civil engineering student. In between the students and the master were a couple of well-known professional Denver musicians, including vibes man Greg Harris and percussionist Manuel Lopez.

Rounding out the band was Josh Reed on trumpet, Greg Wahl on tenor sax, BK Kahn on drums and Mike Facey on bass.

D’Rivera acted as Master of Ceremonies throughout the evening, often speaking of his love for Brazilian music when he introduced tunes he wrote in the Brazilian style. A particular highlight of the set was a D’Rivera original – a tribute to James Moody called “Who’s Smoking?” – that featured such tight, intricate playing by the front line that it sounded like the group had been playing the tune together for years rather than mere days. The band also played a Gorra original called “Jazongo,” which won the 2014 Herb Alpert Young Jazz Composer Award.

Though the set list was mainly comprised of Latin Jazz varieties, there was room for some straight ahead jazz including Dizzy Gillespie’s “A Night in Tunisia.”

D’Rivera led by example, not only with his relaxed and humorous stage banter, but especially with his alto sax and clarinet playing. His sax tone was delicious, strong, pure and highly confident. His solos were consistently intricate and inventive. Harris also laid down several memorable solos where his mallets nearly became invisible due to their speed over the vibes. Through their solo slots, each band member demonstrated why they were selected to be in a band with a master. The playing all around had the sound of jazz veterans.

This concert benefited the Damas de Blanco (Ladies in White) – women whose husbands, fathers and brothers are being held as political prisoners in Cuba. D’Rivera defected from Cuba in 1981 and Friday’s concert was meant to raise awareness of the repression that still exists on the island.

Author Geoff Anderson is host of Tuesday’s Night Beat and co-host of All Blues.