A Record Story—”An Ode to Vinyl”

Snap, crackle, pop! Is that the sound of a bowl of Rice Krispies or an abused record? In a blind test, 7 out of 10 listeners couldn’t tell the difference between a record from a broken home and milk activating that morning bowl of puffed air. It’s a sad fact: records can sound dreadful. Yet…Records are back. And, ironically, one of the main reasons for their unlikely resurgence is because of their great sound quality. But can anyone really tell?

The Vinyl Love Affair
I love records. I’ve been listening to, buying and collecting records for well over 50 years. For decades, they were far and away the highest quality audio source available. For much of their existence, tape was their main competitor: reel to reel, cassette and the ghastly 8-track. With good equipment, records were the first format to offer true high-fidelity sound. Match a good turntable with a really good cartridge, add numerous 15 inch woofers, hundreds of watts of pure, clean power and…ahh….sonic nirvana. 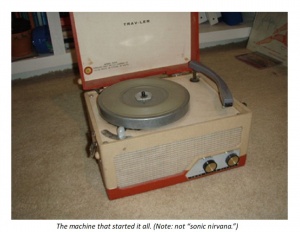 CDs came along in the ‘80s and pretty much did away with album cover art (and, almost, albums themselves). They were more expensive, but offered more music; 60 minutes or so compared to 38 or 40 minutes on vinyl. Then, the iPod hit the scene eliminating the physical product altogether. Now streaming’s the thing, making the concept of “owning” music obsolete.

So records are fun. They can sound great, but not always. Are records delicate or durable? It depends almost entirely on the quality of their care. Properly handled and stored, records can remain in top shape and sound crisp and clear for decades; generations even. However, when mishandled, records can quickly degenerate into a scratchy, screechy mess far more likely to annoy than entertain. Back in records’ heyday in the ‘60s and ‘70s, record abuse by the masses was as widespread and disheartening as disco music. Greasy fingers directly on the playing surface, stacking of records on “automatic” record players, leaving them lying around outside their jackets, and one of the worst sins of all: playing records with a penny taped to the tone arm; these are some of my least favorite things. 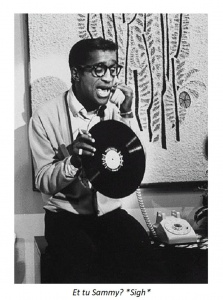 The reason I said records’ durability depends “almost” entirely on the quality of their care, is because record production, again back in their heyday, was notoriously uneven. Some labels used virgin vinyl as a matter of course and all those records sounded great. A couple notable cases in point were German-manufactured records on the ECM label and most releases on Columbia. Other labels weren’t so picky. Stories abounded of record labels that took their unsold records, melted them down, paper labels and all, and used the residue to print more records. The result was vinyl with a paper content sometimes as high as 7%. How does paper imbedded in vinyl sound? Pour the milk on those Rice Krispies and you’ll see. Some records sounded like this right out of the shrink wrap.

I’ve been amused by seeing some “record players” available for sale lately where vinyl and CDs are sold. These are tiny, all-in-one units that come in their own little suitcase. The platter to place the record on is about 7 inches in diameter so a 12 inch LP hangs off the edge. (A 45 fits nicely, however. Yippee!) The single speaker is built in (no stereo here). These are actually little more than toys. In fact, I still have one of those. My parents gave it to me sometime in the early ‘60s, when I was about 5 or 6 years old. It had two controls: a knob for “On/Off/Volume” and another for “Tone.” So, somebody is still making these things. Do you suppose people are playing $25, 180 gram audiophile pressings on these things? Undoubtedly. *Sigh*

One of these little toy record players showed up in the movie, “Seeking a Friend for the End of the World.” The Keira Knightly character carried around a batch of records proclaiming that they sound so much better than CDs. One of the records she carried was The Beat of the Brass (A&M, 1967) by Herb Alpert and the Tijuana Brass. It’s easily identifiable by the field of bright yellow flowers Herb and the boys are standing in on the cover. I mention this, because that’s an album that’s been residing in the Vinyl Vault for about the last 45 years. 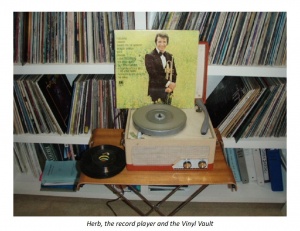 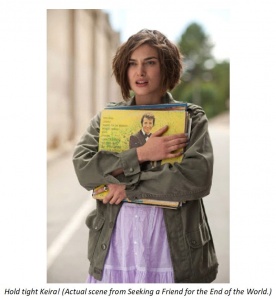 At one point in the movie, she and Steve Carroll find a “record player” and she puts Herb on and waxes not-so-eloquently about the warm rich sound from the vinyl. 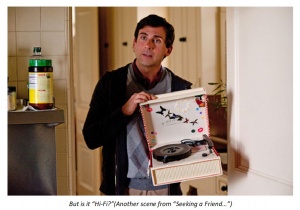 She goes on and on about the great, warm sound of vinyl while the record is playing on this toy record player – in another room! *Sigh*

That toy record player worked great for me for listening to “I’ve Been Working on the Railroad” and “Tumblin’ Tumbleweeds.” But sound quality? *Sigh*

Sound quality
So how about that sound quality? Can your average music fan hear a significant sonic improvement of a record over a CD? I highly doubt it. Even among those who would wax eloquent over the virtues of vinyl, even purveyors of platter platitudes, even they would be hard pressed to tell the difference between the digital and the analog.

To have any hope of vinyl sounding better than a CD, a high end stereo is a must. We’re talking thousands of dollars for speakers, amplification, turntable, cartridge and, for comparison, a CD player. It all has to be set up in a good listening room and you’re going to have to sit facing the speakers with each the same distance from you. See? We’ve disqualified just about every music listener in the world. Who spends that kind of money on a stereo? Who sits right between the speakers? Well, some people actually do that, but their numbers are about equal to the number of people whose hobby is model railroading. 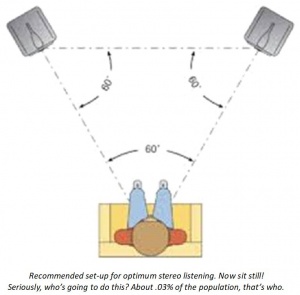 Three Dimensions?
But if you’re a music fan and you really love high fidelity sound, a good set-up really can be sonic nirvana. You’ll hear crystal clear highs, deep, resonant bass, extreme detail like the pick hitting each string on a guitar and a wide soundstage where you can hear the placement of each instrument. An exceptional recording played through an exceptional system will also create a three dimensional sound with some of the instruments coming right out of the speakers. You know you’ve set things up right when Joss Stone crawls out of your speakers, slinks across the living room and licks your ear lobe. 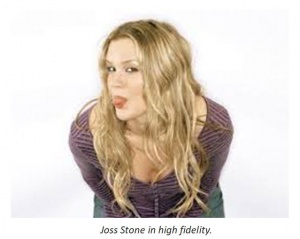 *Whew* Yes! I’ve experienced this! Don’t tell my wife! And it was with a CD! Imagine if I had been listening to a high quality record with (supposedly) superior imaging. Joss may have crawled across the carpet and licked my….well, never mind. (This raises the question of whether excessive high fidelity can actually be dangerous. I’ll have to address that in a different essay.)

Some people complain that CDs can sound a little harsh. And that’s true for cheap CD players. The high end models, not surprisingly, use better components and are able to accurately reproduce all the information on the CD.

Probably the single biggest difference in the sound of CDs and records is a sonic aspect often referred to as “transparency.” It’s a quality that’s a little hard to describe, but basically, it’s wide open sound where you can hear each instrument in detail and with significant spatial separation between them. A good CD can create this too (especially if Joss Stone is singing), but, under certain circumstances, with the right equipment and the right recording, a record can sound better. However, more often than not, during comparisons of a CD with the same record, the only difference between the two is the occasional snap or crackle from the record.

The Concept of the “Album”
Returning, for a moment, to the issue of albums (and even CDs) versus MP3s and streaming, these latter technologies eliminate the concept of the album. I’m not necessarily talking about “concept” albums, like “Tommy” by the Who or “A Love Supreme” by John Coltrane, but rather the idea that an album is a snapshot in time of a band. Like the whole sound quality thing and sitting between the speakers, this is a music nerd issue. A band’s collection of songs recorded at roughly the same time will usually have a similar sound throughout. So if you liked one song on the album, you’ll probably like most of the rest as well. (The exception, of course, is the one-hit-wonders who, more often than not, didn’t have all that much talent but managed to put together one catchy tune.) Also, the real music nerds typically know the band personnel at a given time and/or a given album, providing context to the listening experience. Obviously, personnel changes can affect the band’s sound; sometimes dramatically (e.g. Doobie Brothers Tom Johnston era versus Michael McDonald era).

The album concept carried on into the CD era, but has disappeared with the popularity of, first, iPods, and now streaming. Listeners can pick and choose individual songs unhinged from any other works by the same artist; making the songs mere dollops of sonic pudding floating in the jetsam of an audio mish-mash. Oh well, their loss.

Yet, over the years the Vinyl Vault has grown to around 2000 records and there are many, many real gems in there. Most of them still sound great. (Maybe not ear-lobe-licking great, but pretty close, on average.) I picked up many of those records for free from the various radio stations where I worked over the years. Many others I picked up used or as cut-outs (discontinued by the record labels) for two or three dollars each. Records are still for sale at a few stores here and there. Many of them still sell for two or three dollars, but lately, some prices have been going up. It seems the hipster demand has been having an effect on prices. *Sigh* However, not all the stores have caught on and you can still find plenty of records out there in the two to three dollar range; many great ones too.