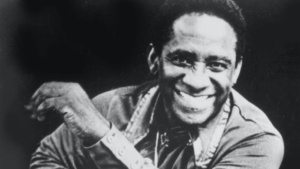 “Afro Blue” was written in 1959 by Mongo Santamaria, using a 3:2 African cross-rhythm (“hemiola”). Written while Santamaria was playing with the Cal Tjader Sextet, it was the first jazz standard to use this pattern, in which the bass plays six cross-beats per measure of 12/8 with 4 main beats played by marimba and flute. In John Coltrane’s 1963 recording, Elvin Jones on drums superimposed two cross-beats over a 3:4 waltz. A number of subsequent recordings followed the Coltrane example. 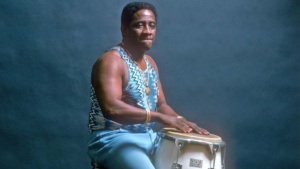 Mongo Santamaria (April 7, 1917 – February 1, 2003) was born Ramón Santamaría Rodríguez and nicknamed “Mongo” by his father. Mongo believed the name came from the Mali people of West Africa, meaning “chief of the tribe”. He emigrated to the United States in 1950 from Havana, Cuba. He started playing with Septeto Beloña in 1937 and with the house band of the Tropican nightclub in the 1940s.  He had grown up with rumba, a Cuban genre of music encompassing dance, percussion and song, mentored by Clemente “Chicho” Piquero. When in the late 1940s Chicho could not play with a tour, he recommended Santamaria for the position. In New York City Santamaria became Tito Puente’s conga player (conguero) before joining Cal Tjader’s Latin jazz combo in 1957. In 1960 Mongo recorded two albums in Havana with Willie Bobo before returning to New York City and forming the charanga orquestra La Sabrosa, with Chick Corea on piano. When Chick Corea left, Herbie Hancock filled in and introduced Santamaria to the song “Watermelon Man” which was an immediate hit. Santamaria asked if he could record it; the response was “By all means.” Santamaria’s recording was inducted into the Grammy Hall of Fame in 1998. Santamaria was inducted into the International Latin Music Hall of Fame. He won a Grammy (Best Latin Recording) in 1977 for “Dawn” and the Blue Note Award in 1985.