Composed in the key of B♭, “Bluesette” (1961) was first recorded in 1961 and released in 1964 on “The Whistler and His Guitar” with Thielemans playing guitar and whistling; he said of it, “If there’s a piece of music that describes me, it’s that song.” Norman Gimbel added lyrics in 1964. 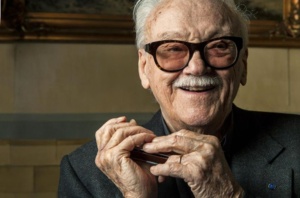 Toots Thielemans, Jean-Baptiste Frédéric Isidor, Baron Thielemans, (29 April 1922-22 August 2016) was born in Belgium, where he was first inspired by fellow Belgium-born musician Django Reinhardt. Thielemans was known for his harmonica playing, guitar-playing, whistling and compositions. He first performed professionally with Benny Goodman’s band when they were touring Europe in 1949 and 1950. He emigrated to the United States in 1951, becoming a US citizen in 1957. From 1953 to 1959 he played with George Shearing, then went on to form his own groups, touring the US and Europe. He recorded a number of movie soundtracks, including “The Pawnbroker” (1964), “Midnight Cowboy” (1969), “Cinderella Liberty” (1973), and “Looking for Mr. Goodbar” (1977). His harmonica theme song for “Sesame Street” was heard for 40 years. He often performed and recorded with Quincy Jones, who called him “one of the greatest musicians of our time”. In 2009 the National Endowment for the Arts designated him a Jazz Master, the highest honor for a jazz musician in the United States. He was noted for his modesty and kind demeanor, often describing himself as “ket”, old Brussels slang for “street kid.” Thielemans was one of a very few musicians to have a successful career as a jazz harmonica player and Ted Gioia said he made the harmonica “a legitimate voice in jazz.”

Norman Gimbel (16 Nov 1927-19 Dec 2018) was an American lyricist, writing for television, movies and popular songs. “Bluesette” was his first major hit; he went on to write the English lyrics for Antonio Carlos Jobim’s “Girl from Ipenema” and adaptations of “I Will Wait For You” and “Watch What Happens” from “The Umbrellas of Cherbourg”. With composer Charles Fox, Gimbel wrote “Killing Me Softly with His Song” and numerous television theme songs, including those for “Happy Days,” “Laverne and Shirley,” “Love Boat,” and “Wonder Woman.” He became a member of the Academy of Motion Picture Arts and Sciences in 1970. His songs have appeared in over four hundred movies and television shows; he was inducted into the Songwriters Hall of Fame in 1984.