Tune in to Jazz with Victor Cooper – weekdays from 6-9 a.m. MT – for Stories of Standards to hear our favorite versions of this song all week long beginning Monday, January 1…Happy New Year!

“Bye Bye Blackbird” was published in 1926 by Ray Henderson and Mort Dixon during their 1923 to 1927 collaboration; it was both their earliest song and the most popular. Many recordings include only the chorus and speculation about the meaning of “Blackbird” tends to focus on the lyrics, sometimes called the “lost lyrics”. The words “blackbird” or “blackbirds” and “bluebird” are especially subject to a wide variety of possible meanings. Among the possibilities are a generalized sad/happy contrast and the “one who waits for me” is sometimes viewed as a sweetheart, sometimes as a caring mother.

Ray Henderson (1896-1970) continued the tradition of his musical family by writing and playing in vaudeville. He became part of a well-known trio (Henderson, Lew Brown and Buddy De Sylva) which formed the basis for the 1956 movie “The Best Things in Life are Free”, in which Dan Dailey played the role of Henderson. Songs he wrote included “Life is Just a Bowl of Cherries”, “The Thrill is Gone”, “That Old Gang of Mine”, “Alabamy Bound”, “Five Foot Two, Eyes of Blue” and “Animal Crackers in My Soup” (featured in Shirley Temple’s movie “Curly Top”).

Mort Dixon (1892-1956), while serving in WWI, directed an Army show which toured Europe after the war. He then returned to the United States and vaudeville, where his first published song (with Ray Henderson and Billy Rose) was 1923’s “That Old Gang of Mine”, which was revived by the Four Tops with their 1954 recording. He wrote “I’m Looking Over a Four-Leaf Clover” in 1927 with Harry Woods, which had a second round of popularity in 1948 when Art Mooney recorded it. He wrote extensively for Broadway; another of his hits was “I Found a Million-Dollar Baby (in a Five and Ten Cent Store)” for 1930’s “Sweet and Low”. The lyrics for “Bye Bye Blackbird” became his best-known and most ambiguous and remain a favorite of singers and instrumentalists. 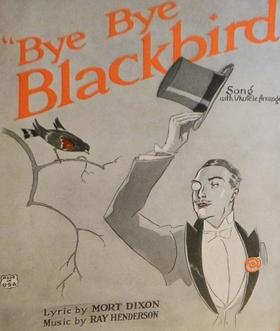