Stories of Standards – “Falling in Love With Love”

Tune in weekday mornings to hear our favorite versions of “Falling in Love Love.” Rodney Franks presents Stories of Standards Monday through Friday at 7:50 and 8:50 am beginning Monday, September 13. 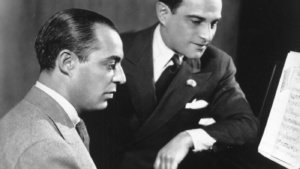 Richard Rodgers and Lorenz Hart wrote “Falling in Love with Love” in 1938 for the Broadway musical “The Boys From Syracuse”, which was based on Shakespeare’s “The Comedy of Errors” and the first American musical to be based on a Shakespeare play. The musical, originally featuring choreography by George Balanchine, ran from Nov. 23, 1938, to Jun 10, 1939, and again from Aug 18, 2002, to Oct 20, 2002. “Falling In Love with Love” was sung by Muriel Angelus (Adriana) as the disillusioned wife of one of the Dromius twins. “The Boys from Syracuse” was made into a film 1940, with Allan Jones as Antipholus (both of Dromius and of Syracuse) and Irene Hervey as Adriana. In addition a 1986 performance at the Stratford Shakespeare Festival was taped, as was a 1991 performance. Gerald Mast, in the book “Can’t Help Singin’” says, “In their best songs, Hart’s acid lyrics cut through Rodgers’ sweet sounds like a knife. In ‘Falling in Love with Love,’ one of the most lyrical waltzes ever written by an American, the singer bitterly chides herself for the childish foolishness of believing in anyone.”

Richard Rodgers (June 28, 1902 – Dec 30, 1979) wrote 43 Broadway musicals and over 1500 songs and was one of the most significant American composers of the 20th century. Having begun composing when nine years old, Rodgers is best known for his partnerships with Lorenz Hart (1919 – 1943) and Oscar Hammerstein II (1943 – 1960).  Renowned for focusing stories on characters and drama, he then wen on to write both lyrics and music for plays and movies. The first person to win an Emmy, a Grammy, an Oscar and a Tony (now collectively known as an EGOT), he also was awarded two Pulitzer Prizes, which made him one of only two people to win all five of these (Marvin Hamlisch is the other). A Broadway theater was named for him after his death. He was also a member of the American Theatre Hall of Fame.

Lorenz Hart (May 2, 1895 – Nov 22, 1943) met Richard Rodgers in 1918, a collaboration that began with contributions to “Poor Little Rich Girl” in 1920 and continued until Hart’s death in 1923, producing over 500 songs. Hart’s writing displayed a consistently brilliant wit, despite his lifelong depression and the sense of inferiority, closely related to his height, which contributed to his alcoholism and the erratic behavior which eventually led to the breakup of his partnership with Rodgers, shortly before Hart’s death of pneumonia. Hart’s brilliant use of wordplay and internal rhyme greatly enhanced Rodgers’ melodies and intensified the emotional effect of their music, which ranged from extremes of comic to tragic exposition.