Tune in weekday mornings to hear our favorite versions of “Fascinating Rhythm.” Rodney Franks presents Stories of Standards Monday through Friday at 7:50 and 8:50 am.

George Gershwin wrote “Fascinating Rhythm” in 1924, with lyrics by his brother Ira, for the Broadway musical Lady Be Good, where it was introduced by the team of Cliff Edwards, Fred Astaire, and Adele Astaire. The Astaires also recorded the song in London in 1926, with George Gershwin on piano. 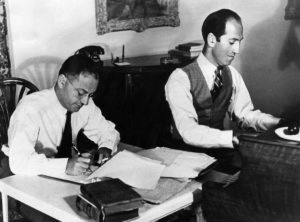 George Gershwin (September 26, 1898 – July 11, 1937) became interested in music as a ten-year-old when he heard a friend’s violin recital. About this time his parents acquired a piano for his brother Ira, although George became its primary user. In 1913, he found a steady piano teacher, Charles Hambitzer, who became a lifelong mentor. George left school at age fifteen to work as a song plugger and writer; his first major success was “Swanee” in 1919, with lyrics by Irving Caesar. Al Jolson decided to sing it in one of his shows after hearing Gershwin play it at a party. George composed his first major classical work, “Rhapsody in Blue”, in 1924. In that year he also joined his older brother Ira to write the musical comedy “Lady Be Good”, which introduced the songs “Fascinating Rhythm” and “Oh, Lady Be Good”. He wrote “An American in Paris” during that stay. George and Ira then went on to write “Show Girl”, “Girl Crazy”, “Of Thee, I Sing” and “Porgy and Bess”. In 1936 George moved to Hollywood, where RKO Pictures commissioned “Shall We Dance”, which would star Fred Astaire and Ginger Rogers. On July 9, 1937, after months of feeling unwell, he collapsed and was rushed to Cedars of Lebanon Hospital where he fell into a coma. Doctors there removed a large brain tumor, but Gershwin died that morning, devastating friends, relatives, and fans across the country. 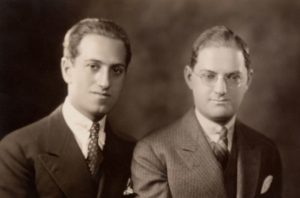 Ira Gershwin (December 6, 1896 – August 17, 1983), oldest of four children, and shy as a youngster, attended Townsend Harris High School in New York City, where one of his closest friends was fellow student E. Y. “Yip” Harburg, with whom he shared an appreciation of Gilbert and Sullivan. Growing up in the center of the Yiddish Theater District, the Gershwins frequently attended local theaters. Ira began his musical career in 1921 as lyricist for “Two Little Girls in Blue”. Not wishing to seem to capitalize on George’s growing reputation, Ira used the pseudonym “Arthur Francis”, based on his two younger siblings’ names. George and Ira joined forces in 1924 with “Lady Be Good”. Together they wrote music for more than twelve shows and four films. With George Kaufman and Morrie Ryskind, Ira wrote “Of Thee, I Sing” which in 1932 won the first Pulitzer Prize ever given to a musical. Ira stopped writing for three years after George’s sudden death before collaborating with other composers, including Kurt Weill, Jerome Kern, and Harold Arlen. George and Ira’s opera “Porgy and Bess” is considered by many to be the best American opera written to date. Ira never fully recovered from the sudden death of his brother and is said to have never again believed in God. Ira was inducted into the Songwriters Hall of Fame in 1971.