Stories of Standards: “Fly Me to the Moon”

“Fly Me to the Moon” (1954) by Bart Howard was first performed by Felicia Sanders at the “Blue Angel” Club in Manhattan, where Howard had been the MC and accompanist from 1951 to 1960. First recorded by Kaye Ballard in 1954, Peggy Lee’s 1960 performance on the Ed Sullivan Show caught the nation’s attention and Miss Lee persuaded Howard to change the name of the song from “In Other Words” to “Fly Me to the Moon”. Frank Sinatra’s 1961 recording of the song was on the space ship that made the 1969 Moon landing. The Songwriter’s Hall of Fame recognized it in 1999 as a “Towering Song”, one “that has influenced our culture in a unique way over many years.”

According to James Gavin, “Fly Me to the Moon” was written in response to Howard’s publisher’s appeal for simpler, less grandiloquent verbiage. Howard said in an interview ”I’ve always said it took me 20 years to find out how to write a song in 20 minutes’ …. The song just fell out of me. One publisher wanted me to change the lyric to ‘take me to the moon.’ Had I done that I don’t know where I’d be today.”

Born in Burlington, Iowa, Bart Howard (1915-2004) left home at the age of 16 to tour with a dance band he moved first to Los Angeles, then to New York City, where he met singer Mabel Mercer the day she arrived in America. After serving in the Army he accompanied Mercer at Tony’s West Side nightclub. While “Fly Me to the Moon” was his best-known composition, he had 49 others to his credit, including “The Man in the Looking Glass”, “My Love is a Wanderer” and “Don’t Dream of Anybody But Me”. Bart Howard died of complications from a stroke, and was buried in north Texas next to Thomas (“Bud”) Fowler, his companion of 58 years. 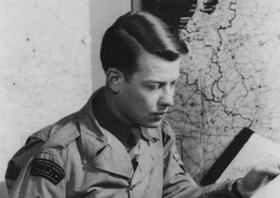