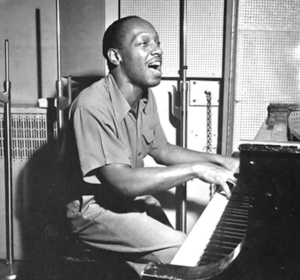 Tune in weekday mornings to hear our favorite versions of “Hot House.” Rodney Franks presents Stories of Standards Monday through Friday at 7:50 and 8:50 am!

Tadd Dameron composed “Hot House” in 1945 based on the harmonic structure of Cole Porter’s “What Is This Thing Called Love?.” Dizzie Gillespie and Charlie Parker recorded “Hot House” with Sydney Catlett, Al Haig and Curly Russell and released it with “Salt Peanuts.” An anthem of the Be-bop movement, the 1953 Massey House live concert recording became one of the best known.

Tadley Ewing Peake Dameron (Feb 21, 1917 – Mar 8, 1965)  was known as the most influential arranger of the bebop era. By 1938 Dameron was arranging music for swing bands, where he introduced bop’s complexity, speed and shifting accents. This enabled small groups to create an impressive sound; his 1956 recording of “Fontainebleau” is an especially good example. In 1940 he left Cleveland, where he had been playing piano, and went to Kansas City to arrange for Harlan Leonard’s Rockets. Two years later he met Dizzy Gillespie, who introduced Dameron’s compositions “Good Bait” and “Our Delight.”

Esquire magazine named Tadd Dameron Best New Jazz Arranger of 1947. The 1950s proved both successful and tragic, with great music produced and the sadly early deaths of two of his fellow band members, both trumpeters: Fats Navarro in 1950 and Clifford Brown in 1956. A narcotics addiction led to two years in prison, but he came back in the 1960s to write for Blue Mitchell, Sonny Stitt and Milt Jackson. His last recording (“The Magic Touch of Tadd Dameron” in 1962) served as a summary of a short life. He died in 1965, having experienced several heart attacks before succumbing to cancer.

Saxophonist Dexter Gordon called him the “romanticist” of the bop movement. Paul Combs, in “Dameronia: The Life and Music of Tadd Dameron” said “Even when the harmonies are very advanced, he’s never calling attention to that,” he says. “They’re all at the service of making this beauty that he wants to put out in the world as a balm for the ugliness and strife.”